The Leader of the Loyal Opposition 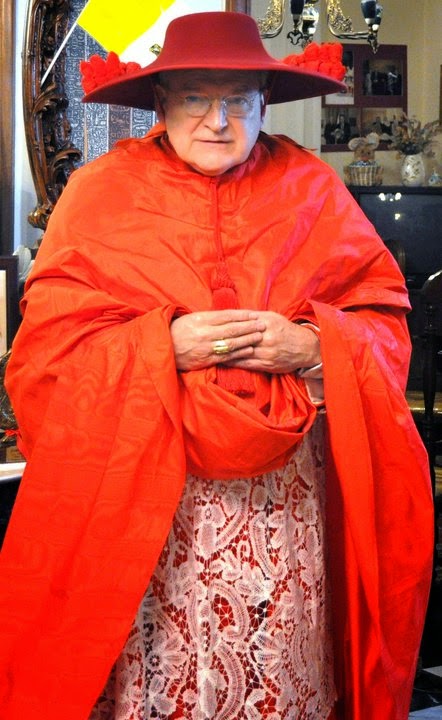 It's been expected for a while now, but for the record Pope Paul VII has removed Cardinal Burke from his position as the chief justice for the Catholic Church's version of the Supreme Court. He has been appointed as chaplain for the Sovereign Military Order of Malta, a position that is being universally referred to as purely ceremonial. As far as I am aware no one on either side of the increasingly sharp divide within the Catholic Church is pretending that this is anything other than a very public de-facto dismissal.

On the upside, Burke's status as the leader of the loyal opposition has now been firmly cemented. May God grant him many years!
Posted by John (Ad Orientem) at 1:39 PM

The supreme dignity displayed in this photo is very much lessened by the Easter bunny on the TV in the background.

Burke might be leader of the loyal opposition, but I don't think he'll put himself in that position. I've spoken with him: he's a poor communicator, a bad speaker, very awkward among crowds, etc. I don't think he has any actually pastoral experience. Who knows.

What a bizarre post. It's the pope's prerogative to do this - so what? Does the Church exist to serve Cardinal Burke, however noble and humble a man he may be?

And what's with the "Pope Paul VII" reference? Is that some sort of weird dig at Bl. Paul VI - as though Francis isn't his own man?

Alan,
If you are unaware of the profound conflict going on in the Catholic Church, then you have not been paying attention.

And what's with the "Pope Paul VII" reference? Is that some sort of weird dig at Bl. Paul VI - as though Francis isn't his own man?

Precisely. It's called satire. The Pope is a flaming liberal who is promoting changes in church discipline clearly aimed at undermining its doctrine.

Was Benedict XVI pushed out by Liberal Progressives in the Vatican?

Was Benedict XVI forced out by Liberal Progressives in the Vatican?