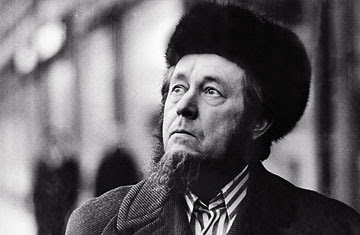 ... According to Solzhenitsyn it was no coincidence that Soviet Russia shared certain common problems with the West, for he saw socialism and liberalism as kindred ideologies. Both were rooted in a common utopian project that began during the Enlightenment, he claimed, and thus both were marked by anthropocentricity—the belief that man is the measure of all things. Each ideology began by rejecting tradition and transcendent authority in favor of theories of liberation, and each was destined to afflict mankind with moral chaos. Although more economically efficient than socialism, liberalism will in the end prove just as unsatisfying, he concluded, for “the human soul longs for things higher, warmer and purer” than “commercial advertising, TV stupor, and intolerable music.”

Unsurprisingly, the Harvard address shocked Americans, particularly journalists, and even struck some of them as ungrateful. How could a man who had escaped the jaws of a despotic regime have the nerve to criticize the country which had taken him in? While Solzhenitsyn insisted that his criticisms were meant to be constructive, coming “not from an adversary but a friend,” he alienated Americans across the political spectrum by condemning a “destructive and irresponsible freedom” that had, in America, been granted “boundless space.” President Ford, put out by Solzhenitsyn’s intransigent anti-Communism, had already declared the dissident a “horse’s ass.” Now others agreed.

Asinine or no, Solzhenitsyn’s speech must be read in the context of Russian conservatism, a tradition which differs in key respects from its American counterpart. Whereas the American conservative imagination is typically informed by the US Constitution and the Founding Fathers, the Russian conservative takes his bearings from iconography, liturgical music, and folk tales. For better or worse, Russian patriotism is bound up with Slavic heritage and the Orthodox Church, not the ideals enshrined in the Declaration of Independence.

Thank you Aleksandr Isayevich. May your memory be eternal.
Posted by John (Ad Orientem) at 12:56 AM

Solzhenitsyn was proud NOT to be a child of the Enlightenment.