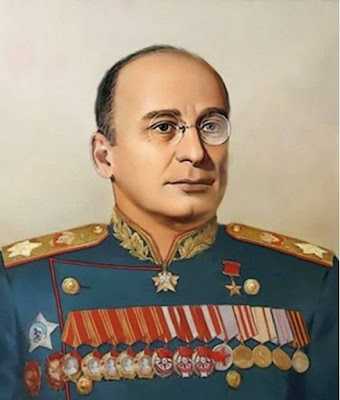 Lavrentiy Pavlovich Beria, aka the Red Himmler, was shot following a brief show trial where he and six other defendants were convicted of various charges, some obviously trumped up. But his many very real crimes place him in the ranks of the most depraved monsters in history. His six codefendants were shot immediately but Beria was killed separately. Allegedly he died on his knees pleading for mercy not unlike many of his victims. His body was supposedly cremated and the ashes scattered in secret.
Beria's fall from power represented the last Stalinesque purge where those being booted from office or power were generally liquidated. Stalin had died earlier in the year and Beria was the first casualty of the succession power struggle.  Thereafter actual executions in Kremlin coups and purges became rather rare. But Beria was almost universally loathed and feared by the other members of the Politburo, and with good reason. Even by Communist standards, it would be hard to name a more twisted and thoroughly evil man.
Posted by John (Ad Orientem) at 1:21 AM