A glimpse of Imperial Russia 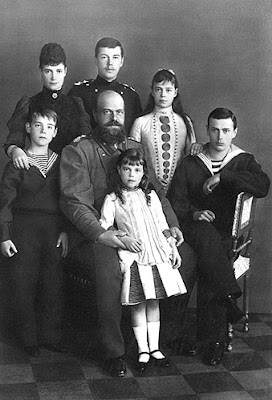 The family of Czar Alexander III

A rare window into life in imperial Russia is due to open on Monday, when hundreds of letters, postcards, photographs and even menus from the court of Tsar Alexander III are put up for auction in Geneva.

The documents were all sent by Alexander's children, Nicholas (who later became Nicholas II), George, Michael, Olga and Xenia to their Swiss tutor Ferdinand Thormeyer.

Mr Thormeyer was born and brought up in Geneva, but emigrated to Russia as a young man where - in 1886 - he became a tutor of French language and literature to the imperial children.

Throughout his time with them the children wrote him letters, partly as a way of practising their French.

But when Mr Thormeyer left Russia in 1899, they continued to write to him and to his family; Olga's letters only stopped when she died in exile in 1960.

The documents were only discovered this year, when a descendant of Mr Thormeyer's was clearing out his attic. There, hidden in an old trunk, he found letters spanning 70 years.

"He came to see us first with just 20 letters," recalls Christina Robinson of the Geneva auction house Hotel des Ventes. "He wondered if they were worth anything."

"We saw that the letters had been written by Olga Kulikovsky, Grand-Duchess Olga Alexandrovna in fact, the youngest sister of Tsar Nicholas II."

A visit to the attic revealed more than 1,000 more documents, including family photographs, postcards, and even sketches.

What the documents reveal are an intimate portrait of life at the court of the tsar and the enormous affection the children had for their Swiss tutor.

We have in our house a baby grand piano that was used by Tzar Nicholas II and his children. My wife's Great Aunt was a governess to the children and taught them piano (and I think French). In addition to the piano we have copious amounts of sheet music with notes in German, English, French and Russian mostly written by the children and in some cases by the Tsar himself. Tzar Nicholas was quite the photographer and online there is large collection of his "home photos". One has the piano that we have that was spirited out of Russian as my wife's Great Aunt was also the wife of a British diplomat. There were a lot of pianos in the various palaces but most were uprights. In the fashon of the day most of the pianos had rugs strewn over them including the one we have. The maker of the piano was "Mühlbach" and it was made by German piano craftsmen in Saint Petersburg in 1896. It is a beautiful piano but in all the moves the piano bench went missing. We play this piano from time to time and it is always kept in tune.