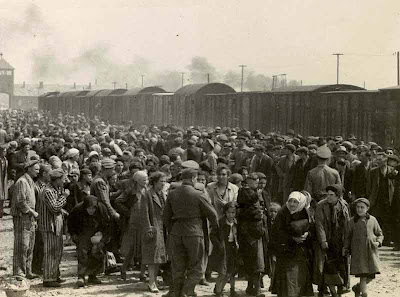 An earlier version of "selective reduction." The people in the foreground have just been selected for a trip to the showers. The smoke in the background is from the crematoria.

Like so many other couples these days, the Toronto-area business executive and her husband put off having children for years as they built successful careers. Both parents were in their 40s — and their first son just over a year old — when this spring the woman became pregnant a second time. Seven weeks in, an ultrasound revealed the Burlington, Ont., resident was carrying twins. “It came as a complete shock,” said the mother, who asked not to be named. “We’re both career people. If we were going to have three children two years apart, someone else was going to be raising our kids. ... All of a sudden our lives as we know them and as we like to lead them, are not going to happen.”

She soon discovered another option: Doctors could “reduce” the pregnancy from twins to a singleton through a little-known procedure that eliminates selected fetuses — and has become increasingly common in the past two decades amid a boom in the number of multiple pregnancies.

Selective reductions are typically carried out for women pregnant with triplets or greater, where the risk of harm or death climbs sharply with each additional fetus. The Ontario couple is part of what some experts say is a growing demand for reducing twins to one, fuelled more by socio-economic imperatives than medical need, and raising vexing new ethical questions.

Experts question whether parents should choose to terminate a fetus just because of the impact the child would have on their lives, and note that even more medically necessary reductions can trigger lifelong angst and even threaten marriages.

The mother said the Toronto doctor who eventually did her reduction performs several a month.

Lynda Haddon, who counsels couples over fetal losses for the support group Multiple Births Canada, said she has heard from a number of people in the past several months who were seeking twin reductions to lessen their burden as parents, something she had never encountered before. Though she strives to help them in a nonjudgmental way, she admits the trend “saddens and scares” her. “Is this a healthy thing? We have to ask these questions: Where does it stop? When do children become a commodity?”

We are damned. Future generations will celebrate the date of our extinction. They will spit on our graves and pave them over, all the while asking how a civilization that could send people to the moon could sacrifice its children on the demonic altar of convenience. And they will be right.
Posted by John (Ad Orientem) at 2:57 PM

Email ThisBlogThis!Share to TwitterShare to FacebookShare to Pinterest
Labels: abortion

At this point all I can do is pray for the end.

On this point you have spoken my heart--my broken heart. Better that we were never born than do this to them that are waiting to be.

You are right, and they will be right. God help us.

Future generations would celebrate the date of our extinction if we weren't so keen on eradicating them first.