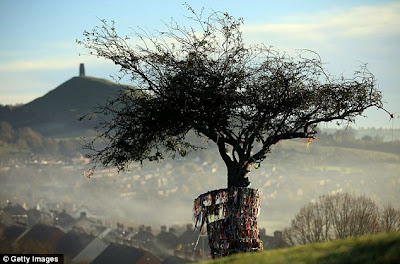 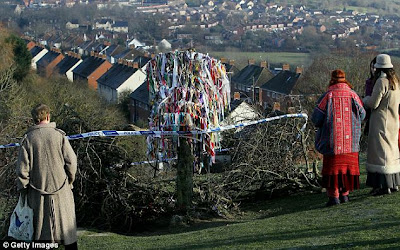 As has been widely reported on the web a tree that according to a pious tradition was originally planted by St. Joseph of Arimanthea in Glastonbury England was discovered chopped down today. The tree was a popular attraction for both tourists and Christian pilgrims. The tree was said to blossom each year at Christmas and on Easter. A venerable custom has seen thorns from the tree sent the table of The Queen for Christmas dinner. Thorns were removed yesterday and sent to the palace.

At the risk of sounding less than charitable I am pretty much in agreement with VSO on this one. (Caution strong language at the linked site.) The general public should not be obliged to support the perpetrator(s) in jail. Those responsible should be taken to the public pillory and given a good dozen strokes with a cane and then clapped in the stocks for a few days so people can walk by and throw rotten vegetables and the like at them.

I'm glad we're in agreement, and like the picture. I have the feeling God has something else in mind.

Environmentalists should be up in arms too over the senseless destruction of an old tree.

Quite seriously, I happen to know where a specimen of Glastonbury Thorn is *alive*. Many years ago, a parishoner of a Seattle area Episcopal parish brought home a cutting of the plant, last I heard it was thriving outside the church. He was a botanist and doing family research in Britain sometime in the 50's. I can't believe the Brits can't salvage some of the original to get another one going. If they can't I can suggest where its daughter lives.

"Then God said to Jonah, 'Is it right for you to be angry about the plant?'

And he said, 'It is right for me to be angry, even to death!'

But the LORD said, 'You have had pity on the plant for which you have not labored, nor made it grow, which came up in a night and perished in a night. And should I not pity Nineveh, that great city, in which are more than one hundred and twenty thousand persons who cannot discern between their right hand and their left—and much livestock?'"