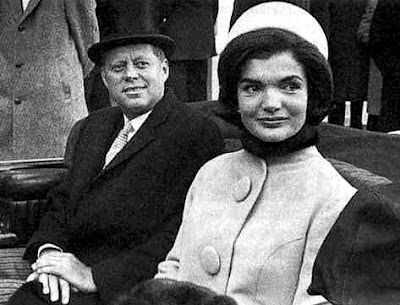 John F. Kennedy is sworn as President of the United States. It was in many ways a bellwether of change. The youngest President to be elected to the office, probably the most charismatic, and the last president elected before the nation would be profoundly shaken by a controversial war abroad and sweeping social tensions at home. He was the last president to dress for his inauguration (a state occasion) and the last to ride in an open car during the parade.
Posted by John (Ad Orientem) at 11:33 PM

Like many of us over 55, I was in elementary school and watched the inauguration live on TV at school. I especially remember Robert Frost reading the poem he wrote for the ceremony while trying to keep the sun out of his eyes. (And the clothes really were splendid -- at that time my grandfather, a mechanic, still wore a morning coat to usher in church. Perhaps a return to some formality in dress might encourage a genuine return to civility?)

Big fan of the era but not the man, a big nothing who mainly just wanted to be elected to office. He was handsome and from a better time, which is why people grieved and miss him.

One wonders how exactly the fashion in this country in the span of less that 10 years went from this level of class to polyester Magical Mystery tour tops with bell bottoms.

Must have been the fluoride in the water. ;)

JFK will always live in infamy for the ushering out of the man's hat from daily wear. For those amongst us who are "follicle-challenged", it's been a long dark night ever since. Or a long hot summer, depending on where you live.