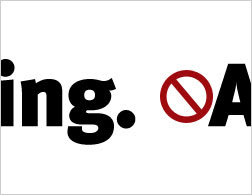 There’s one typographical atrocity that drives me nuts. And it’s the one I’ve just committed. I’m raising the subject because the most-read article on Slate at the moment is a denunciation of double spaces after “periods”, as Americans call them, by Farhad Manjoo

For the record, I never took keyboarding. I took "typing." And yes double spacing after ending punctuation was drilled into me as obligatory. As for the guidelines of MLA, I could not care less. Anyone who advocates parenthetical in text citations is a linguistic - stylistic philistine who if ever right on any subject, is so purely by accident. Chicago Manual of Style however is not so easily dismissed. If they are telling me that you only use one space and not two then I am wrong. End of discussion.
Posted by John (Ad Orientem) at 4:19 PM

"A space signals a pause," says David Jury, the author of About Face: Reviving The Rules of Typography. "If you get a really big pause—a big hole—in the middle of a line, the reader pauses. And you don't want people to pause all the time. You want the text to flow."

This is the key issue, for me. In an aural culture accustomed to long, complex sentences (and trains of thought) - rather than a visual and digital culture accustomed to short, simple sentences - a "a really big pause" at the end of a sentence is important. It is a distinct pause - a full stop and completion of a thought - from those at commas, colons and semicolons.

The lack of such nuance and structure in sentences (and its related punctuation) in modern American English goes a good way toward explaining why Americans read aloud so terribly. We don't know how to "read" punctuation and sentence structure and translate that into appropriate speech. Listen to the average educated person reading Shakespeare or the King James Bible aloud for examples of how dreadful our facility is with sentences of any length and structure, e.g., people tend to stop throughout the sentence regardless of punctuations and then not stop at periods.

But, given our fallen speech, one may as well defer to fallen style. I probably won't, but I probably should. (Incidentally, Blogger seems to automatically publish only single spaces after periods, even if you type two).

I was taught double spaces after a period in computer lab, not in a typing class on manual typewriters (though our typing class still used them).

Richard Alonso made the following comment at 3:39:58 PM today on the original Slate article:

"Aesthetics--or pleasure at seeing either one or two spaces between sentences and after full colons--is of course individual. To my taste, the two-space system is not only more aesthetic (it is not surprisingly called French spacing), it also makes sentences easier to read--not least when a sentence ends with an abbreviation like U.S. or Inc.

But let's set the record straight about the history of typography and "French spacing." It has nothing to do with typewriters.

Until recently, American and British typography consistently used twice as much space between sentences (and after full colons) as between words. At the end of the nineteenth century, there was a major innovation in typesetting: the Linotype machine, which replaced hand composition of type. A Linotype operator’s key strokes caused the machine to retrieve molds (matrices) for letters, assembling a row of matrices with imprints of those characters. Next the machine poured molten lead into the matrices, resulting in a complete “line o’ type.”

A justified (or straight) right margin is achieved by varying the spaces between words and sentences. The Linotype machine used wedges for spaces, rectangles for letters. After filling a line as closely as possible, the operator would pull a handle, forcing the wedges upward to expand (and thereby “justify”) the line. Unfortunately, two wedges together for the sentence spaces was a monkey wrench for the machine. A work-around was inserting an en-space and a thin-space between sentences, for which typesetting houses charged extra, calling it French (fancy) spacing. Newspapers used the cheap method (without extra space between sentences), while books publishers usually maintained the higher-quality typography of French spacing.

Early computer typesetting technologies regrettably imitated this limitation of the Linotype machine by reading the input of multiple word spaces as only one. Now, non-French spacing is taught as standard typing practice, under the misconception that double-spaces between sentences were only for old-fashioned typewriters (which used a fixed-letter-space font that dearly depended on French spacing for readability)."

I am with you on the MLA parenthetical citation. I hated that when I was forced to use it in college courses. It makes reading a paper really hard with a (Whatever 345) in the middle of it.

The rule is simple: if you are using a fixed-width font (as with an old manual typewriter), then double spacing after full stops makes it easier to read. If you are using proportional spacing (as in some electric typewriters and most word processing programs) use one space.

As for inline citations (the "Harvard" method), it is recommended by Chicago, and I don't find them nearly as annoying as endnotes. There was some excuse for endnotes in the days of manual typewriters and hot-lead typesetting, but nowadays there is no excuse for it at all.

Unless something has changed drastically since my college days (admittedly possible) Chicago Style employs either footnotes or endnotes. I vastly prefer footnotes.

I am always annoyed that Blogger won't let me use double spaces after a sentence. This is the right way to do it, regardless of what the Chicago says. If it says otherwise, it has gone haywire.

I am with you, Anastasia. Double space for me!

I nearly came to blows with a study partner in graduate school over this issue. So I'm glad to see that other people feel passionately - albeit incorrectly for those advocating two spaces - about this topic.

I teach English (part-time) at a community college. I'm afraid to say that all aspects of language change: orthography, typography, etc. With the sea-change of word processing on the computer, many things have changed. We just received some from MLA (Modern Language Association) regarding the form of citations and "Works Cited" (no longer "Bibliography" ... sigh) in 2009. Anyway, the double-space after end-punctuation has gone the way of the dinosaurs, friends. This is a no-win battle; take up a worthier cause, say I.

As a professional mathematician (though it applies to those in other blackboard sciences like theoretical physics and computer science as well), I am delighted that all of this is irrelevant to me: whether I put the double space (as I do because I, too, learned typing, not "keyboarding" in my youth) or a single space, LaTeX, the typesetting software we all use, will typeset a larger space after a full-stop than after other punctuation, unless I put a \ before the space to suppress the addition of extra space, as in the case of an abbreviation.

Fortunately, Donald Knuth, whose TeX is the underpinnings of both LaTeX and the less-used AMS-TeX, had a good sense of typographic aesthetics, so whatever the self-appointed arbiters of written style may say, mathematical papers will continue to be more readable for the extra wide space following the ends of sentences.

Somewhat amusingly, the APA, the other pack of insufferable busybodies, besides the MLA and U. Chicago, who try to dictate writing style prescriptively, recently switched to advocating the two-space convention.