Is Wall Street listening to the Tea Party?

It was not the first time the agencies, Standard & Poor’s and Moody’s Investors Service, warned that the nation’s gilt-edged rating might fall into jeopardy.

But the two statements, made within hours of each other, were seized on by deficit hawks as further evidence that the government must reduce spending and debt to avert disaster. That is just what many Tea Party supporters insist.

But many economists say the reckoning, if it comes, is still years or even decades away.

The bond market shrugged at Thursday’s news. Indeed, even some experts who want to see the deficit reduced said now is not the time to cut federal spending drastically, given the weakness in the economy and high unemployment.

But others see the mounting national debt as a potential danger. What once seemed unthinkable — that one day the United States government would no longer be accorded the highest credit rating — is now not only thinkable, but increasingly probable.

“I am concerned about the unsustainability of our long-term situation,” said Peter G. Peterson, a co-founder of the Blackstone Group and a prominent deficit critic.

In other news Moody's and S&P strongly hinted that they are considering downgrading the credit rating for Confederate Bonds. 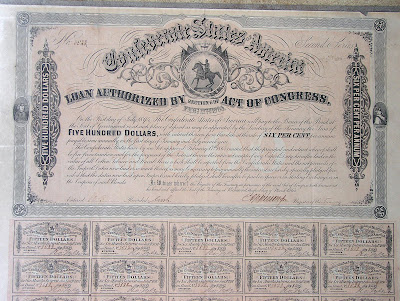 Given the history of both rating services, this is just hot air.