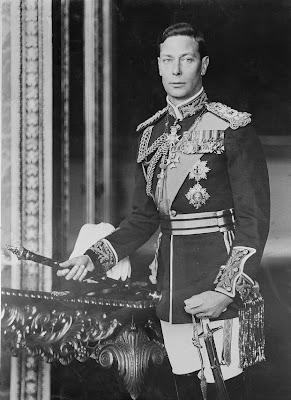 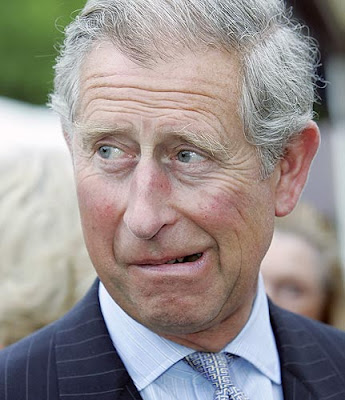 And his grandson Prince Charles

I have just been to see the film, The King’s Speech. Leaving aside the historical inaccuracies which have been pointed out by others, it was a moving spectacle. Two things stood out: the warm relationship between the Duke of York, later King George VI, and Lionel Logue, his Australian speech therapist; and the King’s unflinching acceptance of his destiny.

“Bertie”, as he was known to his family (but not, incidentally, to Logue), was shy, unconfident, ill-educated, in delicate health and with a severe speech impediment. But he was also honourable, dutiful and courageous – qualities that more than compensated for his defects. With his very stable and happy family life, and his insistence on sharing in the country’s hardships (he had a line drawn around the inside of the baths at Buckingham Palace as an indication of the small amount of hot water to be used) he set exactly the example of kingship needed during the war.

He was also, like his daughter, our present Queen, whose sense of duty is so like her father’s, a Christian monarch. As “Defender of the faith”, in his speech of September 3 1939 at the outbreak of war, he was able to tell his people quite sincerely that we “reverently commit our cause to God” and that “with God’s help we shall prevail”, concluding “May He bless and keep us all.” In an equally memorable speech of December 25 1939, quoting the poem by Minnie Louise Haskins, he concluded with the words: “May that Almighty hand guide and uphold us all.”

I mention this because I have been reading a book entitled Harmony, written by His Royal Highness the Prince of Wales. All about the laws of Nature, ancient wisdom, the correspondences found “between the patterns made by the orbiting planets and the forms found in Nature”, Pythagoras, geometry, the Egyptian civilisation, the grammar of harmony, the music of the spheres and much else besides, the book is highly significant for one thing: there is nothing in it suggesting that the Christian faith is special, unique or any different from the spiritual wisdom of other faiths such as Buddhism or Islam.

Chartres cathedral, a magnificent statement of Catholic Christianity and dedicated to Our Lady, is discussed by HRH only in relation to the ancient architectural designs and patterns it has followed and because “like all great cathedrals, temples, mosques and holy places, it acts as a bridge between the world of Nature, human society and the domain of the spirit”.

Prince Charles is on record as saying that when he is king he would like to be known as “defender of faiths”. To be sensitive to the different faiths practised by your subjects is one thing; not to wish to uphold the Christian faith that has been the bedrock of your country for over 1,000 years is another.

HRH writes: “The Golden Thread of wisdom and the inner need to maintain harmony in the world… is not some wishy-washy, New Age invention of the late 20th century.”

Email ThisBlogThis!Share to TwitterShare to FacebookShare to Pinterest
Labels: Monarchy

The Christian character of any Christian monarchy does not depend on the personal piety or orthodoxy of the sovereign -- particularly in the case of a modern constitutional monarchy. Some kings are pious and orthodox, sometimes to the point of being canonized saints (Louis I of France, Stephen of Hungary, Charles I of England); many more are nominal in their Christian profession or rule in a manner that suggests that they have no fear of God whatever (Ivan IV or Peter I of Russia). Nevertheless, so long as they do not publicly deny the Faith, and they continue to carry out their duties with respect to the Church, they remain Christian monarchs. It is the office, not the person, that is "Christian."

It is well-known that Charles would like to be known as "defender of faiths." But it is not for him to change the titles of the throne that he is to inherit. "Defender of the Faith" is a constitutional title of the sovereign (originally bestowed, ironically enough, on Henry VIII by the Pope), which the sovereign cannot unilaterally change. "Defender of Faiths" is only a well-intentioned but silly and vapid notion held by Charles Mountbatten as a private person, but he will be "Defender of the Faith" by law when he becomes King.

Of far greater concern than the personal piety or orthodoxy of the sovereign is the collapse of orthodoxy and orthopraxis in the Church of England whose "Supreme Governor" Charles will be. If the English monarch is the "Defender of the Faith," it is the faith of the Church of England that he is supposed to defend. That is a faith which is less and less worth defending with each passing year. (If only the rumours of Charles's conversion to the Orthodoxy of his father were true!)

As to the alternatives: there is no way that the Jacobite pretender is going to come to the throne. A country whose "liberal values" stop short of being able to repeal the Act of Settlement is not going to tolerate a Roman Catholic monarch. And, or course, there is no way of knowing that Prince William is any more loyal a son of the Church of England than his father.

Secondly, I have to scold you on your "visual rhetoric." It is hardly fair to contrast a formal portrait of George VI in full military uniform with an unfortunate candid shot of Prince Charles, as if the goofy look on HRH's face necessarily bespeaks his character. I am sure there are plenty of photographs available of Charles in his Royal Navy regalia.

Doesn't the Prince of Wales vist Mt. Athos and isn't he listed as a Friend of Mt. Athos?

I'm hoping for William V personally, though I doubt his views would be particularly different. It might do the Church of England some good were it disestablished though...

It seems I have read recently that Charles intends to be called "George VII" rather than Charles III.

Chris,
You make some good points. And I freely concede your observations about the near impossibility of a Jacobite restoration. That was just my inner legitimist whining. With respect to...
I have to scold you on your "visual rhetoric." It is hardly fair to contrast a formal portrait of George VI in full military uniform with an unfortunate candid shot of Prince Charles, as if the goofy look on HRH's face necessarily bespeaks his character. I am sure there are plenty of photographs available of Charles in his Royal Navy regalia.

Pifft. Of course it wasn't fair. It was an editorial comment. I was attempting to visually portray HRH as the feckless self-indulgent twit that I think he is. You have no idea how many "formal portraits" I had to look at before I found one suitable for my point. :-)

Yes, one day he will (probably) be king. And when that day comes (long may it be delayed) I will extend a bit more deference out of respect for the crown. But for now, may God save The Queen and grant her many many years!

OK, I withdraw my complaint about the pictures. You're certainly entitled to your opinion about HRH, which is not without foundation. And you certainly conveyed that opinion ably with the photograph.

I'd like to think that you are wrong in your assessment of Charles, but I am afraid that you may be right. I hope that he will prove to be a better king than I fear he will be.

If he's the usual monarch, he may just surprise Camilla (whatever she will be called) by a procession of extracurricular girlfriends ---OH! Kind of like SHE was! I can't see why she or anyone else should be surprised by that. In any case, putting not your trust in princes, in sons of men, never made more sense than now. Not that the Brits put trust in anything at the moment. If Charles were "faithful" to the Anglican entity one could still argue he was anything but Christian.