The terrifying rate at which smokers die from smoking 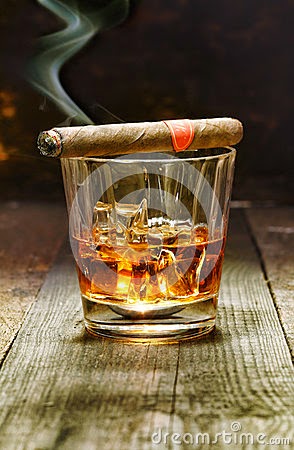 Two-thirds of smokers will die early from cigarette-triggered illness -- unless they choose to kick the habit, according to new research from Australia.

The study of more than 200,000 people, published this week in BMC medicine, found about 67 percent of smokers perished from smoking-related illness. That rate is higher than doctors previously estimated.

Tobacco smoke can boost the risk for least 13 types of cancer. The earlier you quit, the better.  “The relative risks of adverse health effects increase with increasing intensity of smoking,” the study states, “measured by the amount of tobacco smoked per day, and with increasing duration of smoking.”

It's been roughly twenty years since I smoked with any degree of regularity. It's probably been three or four years since I've smoked at all. But I still miss it. There's just nothing like sitting on the front porch after a nice dinner with a good quality cigar. Why is it that everything fun in life is likely to kill you?
Posted by John (Ad Orientem) at 10:22 PM

A cigar does not carry the same risks as cigarettes.
I am also not entirely sure I would put much weight on what this study says. This simply establishes a correlation already quite known and is actually evidence of how screwed up our research system is. This is essentially the sort of thing you do in order to generate hypotheses- then you go and work on what the mechanism is for what you are seeing, or you just tell everybody to stop smoking, save your money and go work on something else.
I would still like to see some work on the rise of Omega-6 oils and their contribution to cancer since WWII. They are known to cause inflammation and may turn out to be more carcinogenic than cigarettes.

Why is it that everything fun in life is likely to kill you?

If done the way God intended, marital relations are pretty safe. And while I've never smoked a cigar, I bet relations are more fun too.

They are asking the wrong questions. How much smoking? How much reduced lifespan? The fatality rate for life is 100%.

Daily oral or cigarette tobacco seems pretty risky. Cigar or pipe, I doubt you are adding much if anything to your lifespan and quality of late life by abstaining.

Anti-Gnostic, anti-tobacco zealots are just that - zealots. They will never stop denouncing tobacco in any way, shape, or form.