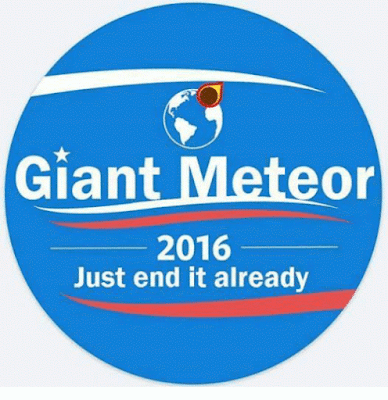 Roughly 13 percent of Americans think extinction via “Giant Meteor” would be preferable to electing Hillary Clinton or Donald Trump the next U.S. commander in chief.

“It’s a simple reality that both of this year’s Presidential candidates are unpopular. Clinton’s favorability is 39/54, and Trump is even worse off at 35/58,’ the pollster’s report reads. “This has given rise to the ‘Giant Meteor for President’ movement, and we find that the Meteor would poll at 13 percent — far more support than the third party candidates actually on the ballot — with Clinton at 43 percent and Trump at 38 percent. The Meteor is particularly appealing to independent voters, functionally in a three-way tie at 27 percent to 35 percent for Clinton and 31 percent for Trump. Maybe that’s who the Libertarians should have nominated.”