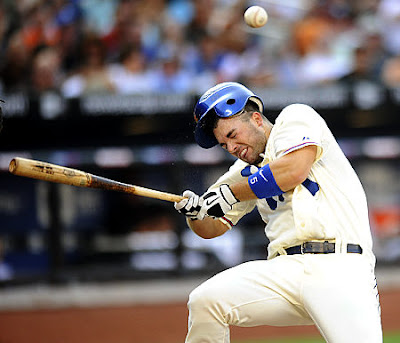 David Wright a split second after getting cracked upside the head by a 94 mph fastball.

If like me you are a Mets fan, there is just no way to sugar coat this season. It has been nothing less than awful. There have been examples of sloppy fielding and play. But by far the most devastating blow has been the endless string of injuries, many of them serious. Most of the position players who started in April, including some of our best, have been injured and put out of action for prolonged periods, in some cases most of the season. Some are still out. Also almost our entire starting pitching rotation is down along with our closer.

The only player that has stood tall through it all has been David Wright who has been the backbone of a battered team. But Saturday his luck ran out. He got drilled in the head by a 94 mph fastball. Watching the video of that made me cringe. David was taken by ambulance to the hospital where he is spending at least the night with a very nasty concussion. No one is even hazarding a guess how long he will be out.

They might as well just start flying a Red Cross flag over Citi Field. I can not recall any team that has had such an incredible run of bad luck in recent years. We are not far from just calling up an entire AAA minor league squad and saying go play ball and try not to hurt yourselves. I understand that baseball, like any sport, has some occupational hazards. And one expects the occasional injury. But to see practically your entire team and several high caliber replacements from the minor leagues go down in one year is crazy.
Posted by John (Ad Orientem) at 2:48 AM

Actually, that sounds remarkably like what the Blue Jays have suffered through.

"anno horribilis" = in, during the year of a horrible person

I think you meant "anno horribili", which would mean "in, during a horrible year".

Has any team suffered as much in one year?

If I may be permitted to make an entry from the NFL, I would have to say that my Redskins, suffered more a couple of seasons ago.

We were already playing second and third stringers in almost all key positions when Sean Taylor was murdered (God that still hurts to write that). Then it only piled on from there including the loss of the game meant to honor him due to an inexplicable call by our Hall of Fame head coach and culminating in the loss of our starting QB for the remainder of the season.

Yet the truly valiant remnants of our team managed to haul themselves from the deep black pit of despair to make the playoffs only then to have their arses beat by 21 points. Finally our beloved coach quit.

And who could blame him...


Anyway that is my two cents. Hope it puts your sorrows in perspective anyway. I am so very glad that your player was not seriously hurt by that ball.