Is South Carolina about to secede? 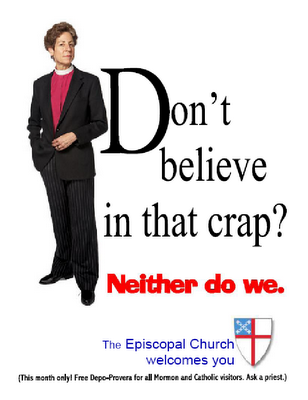 No I am not talking about the state.

There are a couple of interesting posts up over at Canon Kendall Harmon's blog TitusOneNine (here and here). While Kendall is leaving his bishop's cards face down for now, he is clearly implying what observers have suspected for some time. The Episcopal Diocese of South Carolina is about to do something fairly dramatic in response to the institutional apostasy in the Episcopal Church (TEC). As anyone who has followed their recent doings knows TEC crossed (and then burned) all sorts of bridges at its recent convention.

Some seem to believe that the DofSC is about to bolt and join the newly formed ACNA. Maybe. But my gut says they are not quite ready to go that far. This is only my guess so take it for what it is worth. That said I think we will see South Carolina adopt in reverse what the Archbishop of Canterbury has proposed, namely a sort of two track membership in the Anglican Communion. In substance I suspect that the DofSC will say that they are remaining in administrative union with TEC (if only barely) but they will isolate themselves in every meaningful respect. This likely would extend to limiting sacramental communion with much of the rest of their church. Finally I expect that this action will be backed by a crystal clear warning to TEC and Ms. Schori that any attempt at coercion or interference in the DofSC by the broader church will provoke immediate secession.

In any event the suspense should not last for too long. Their bishop is expected to outline his plans later this week. Let us keep these people in our prayers as they grapple with the disaster that has overtaken their church.
Posted by John (Ad Orientem) at 5:16 PM

When the bishop was elected he was heavily criticized by the Left for supporting the option to leave TEC (I prefer E-PAC). Even though he denied that he would take SC out of E-PAC, he was actually not granted to his election (denominational polity) the first time and the diocese immediately reelected him and consent was granted.

He will obviously be branded a liar by the Leftists, but I believe that he has truly tried to stay within E-PAC. However, it is an impossibility for an honest Christian.

Indeed please pray for South Carolina and all those who struggle with these tragic circumstances.

I will pray for them. I left the Church of England when it ordained women priests in 1992 but the emotional charge is still with me and I feel very much for those Anglicans still trying to carry on against impossible odds.