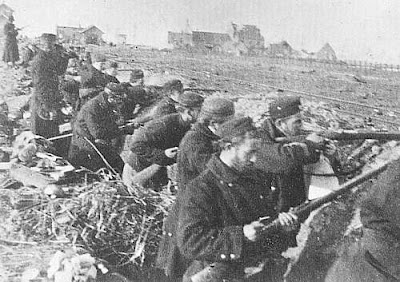 Belgian soldiers prepare to fight the German Army in August 1914.
On August 2 1914 the Imperial German Government delivered an ultimatum demanding free passage for its army through Belgium to attack France. Hopelessly outnumbered and outgunned the Belgians nonetheless chose to resist, as best as they could, the invasion of their country. There weren't a lot of truly "innocent" victims in the insanity of the First World War. Belgium was the exception. The country had strictly observed a policy of diplomatic neutrality and isolationism. Relying on the honor of its neighbors to respect their neutrality (guaranteed by treaty) the Belgians refused to enter into any alliances and largely ignored their national defenses. At the outbreak of hostilities their army had almost no heavy artillery and only a handful of machine guns. Their rifles were antiquated with many soldiers limited to one round of live ammunition per year for target practice. They paid a heavy price.
Posted by John (Ad Orientem) at 2:16 AM

Email ThisBlogThis!Share to TwitterShare to FacebookShare to Pinterest
Labels: history, World War I

He who is without a staff will be bitten even by a sheep.

I don't think the Belgians were so unprepared as this article suggests. King Leopold II, who died just 5 years before the start of WWI, had introduced compulsory conscription and modernised the armed forces.
The bottomline is that the Belgians were overwhelmed by the (sheer number of) the German troops.

In Belgium, WWI amounted to 4 years in the trenches between the tiny coastal river Yser and the North Sea. More than 1/2 million are believed to have died in the "war of position" that was fought around Ypres, Passendale etc. Countless non-Belgian troops (particularly from Anglo-Saxon countries) left their lives in these trenches, alongside Belgian soldiers. This is where Harry Patch, who died last month, fought. This also where gas was used as a weapon for the very first time ("mustard gas", akas yperite, after the name of the town of Ypres). Last but not least, these are the tragic events that John McCrae refers to in his famous "In Flanders' fields".