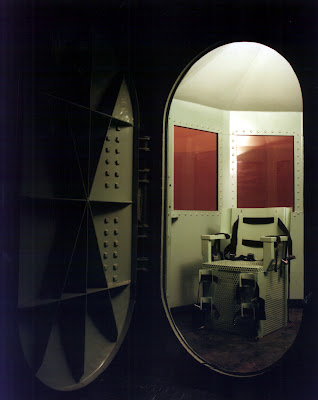 Ratio of death sentences reversed on appeal... approximately 7 of every 8

Number of executions since reintroduction of the death penalty in 1977... 13

Number of death row inmates who died of natural causes... 48

Number of death row inmates who died from suicide... 17

The California bench and bar have a heavy hand in making administration of the death penalty expensive and time-consuming.

From what I've read, death penalty is more expensive in all states versus life sentence.
My husband and I are definitely on opposite sides of the death penalty. I'm opposed because of the excessive cost and the risk of executing innocents. I'm not yet opposed on moral grounds, but am working on it.
Angela

Reactionary,
There is some truth to this. But CA is not substantially different from most other states with the DP.

Angela,
I agree with you on both points. I am an abolitionist mostly because of the danger of executing innocent persons which has been repeatedly demonstrated. The cost is however a factor as well. According to two major studies abolition of the DP in California would reduce that $137M bill by more than 90%. Life in prison w/o parole is a very effective way of removing dangerous offenders from society. The only compelling argument in favor of the DP is retributive justice. Weighed against the high risk of executing innocent people (which is believed to have occurred in other states) I think it's time to relegate capital punishment to the history books.

The typical argument, in my mind, that has been used by death penalty opponents is that there is always a chance that the person found guilty by a jury may, in fact, be innocent. But, statistically, this has been proven false. Nor do I believe that just the possibility of an innocent man being put to death should stay all exectutions. That same argument would also nullify prison sentences and the whole justice system would fail because there are always going to be guilty people set free just as there are innocent people who may be incarcerated.

Having said all that, I am a death penalty opponent. God is the only one who can take life and I believe that all guilty persons, even those not imprisoned (such as myself) need the rest of our lives for repentance. Now, I am not arguing that the state should get into the repentance business, but that should be enough for Christians to do prison ministry for those who do wish to change.

Chris,
I am not certain where you are getting your statistics from, but the ones I and most persons familiar with capital punishment have seen do not support your assertion. The danger of innocent persons being convicted is if anything much higher than thought for many years. One need only look at the large number of exonerations over the last 15 years or so as a result of the increasing availability of DNA testing. Add to that the high ratio of death sentences reversed on appeal. Many of these are on technical grounds but many others are because of serious flaws in the prosecution of the cases. These problems are not limited to California, and in fact exist in every state where capital punishment is legal.

Then of course there are the actual cases where we know beyond reasonable doubt that innocent people were sent to death row. There are three such individuals in California alone. Most legal experts acknowledge two near certain cases of actual wrongful execution (one in Missouri and one in Texas) over the last 25 years. Add to that one case of a man who died of natural causes after 18 years on Florida's death row and was exonerated post mortem by DNA. Then there are the roughly thirty cases (as of June 2007) of death row inmates nationally where there is strong (though not conclusive) evidence of wrongful conviction. And these are just the ones we know about.

Also many states have extremely low standards for legal representation in capital murder trials coupled with very severe restrictions on the right to appeal which aggravates the current situation. Texas, Virginia and Florida are among the worst examples.
I must also regrettably disagree with your equivocation between death sentences and other lesser forms of punishment. If one makes an error (which has happened), and you send an innocent man to prison for years or even decades, that’s a bad thing. But even if you can not return the years lost you can still release him with an apology and financial compensation that would relieve the victim of judicial error from the need to work for a living. This option is not available in capital cases once the "switch" has been thrown. The death penalty because of its finality is unique and must be approached with that view in mind.

Finally, excluding retributive justice there is no real argument that holds water favoring the death penalty over a natural life sentence. From a utilitarian perspective capital punishment is nothing but a huge waste of money that serves no useful purpose not better dealt with by life in prison.

For the record, I used to be a strong supporter of the DP, until I took a really hard look at it. Capital punishment is one of those things where the more you learn about it, the less you like it. It took a long time to break down my strong biases in favor retributive justice for the most heinous crimes. And I would readily concede that many of the inhabitants of death row are monsters eminently deserving of the long drop with a short rope. But that by itself can not outweigh the compelling arguments against the institution.

I work for the AG's office, I see Capital cases cross my desk all the time, one thing that happens is that anti-death penalty groups file applications to be heard in the appeals process, it extends the lengths of the appeals. One thing I am able to see is the details of the crimes they have been convicted of committing. It is sickening. I have to say the Jesus prayer throughout the day to keep my sanity. The longer I work for the AG's office the more I lean towards the total depravity of mankind.

It gets worse. You, me, and everybody including the victim's families themselves are taxed to keep such monsters fed, housed and medically treated. And with access to a law library.

I have a market-based solution to the dilemma: declare people convicted of DP offenses outside the protection of the law. A convict could avoid being killed at the hands of the victim's family by convincing them to sign a contract sparing his life in exchange for some consideration.

Short of that, DP opponents could underwrite the costs of protecting a convict from retaliation and keeping him housed, clothed and fed themselves.