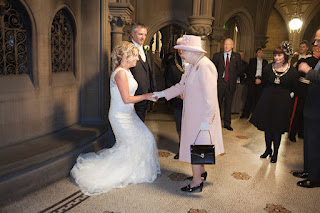 The newly married Mr. and Mrs. John Canning had an unexpected guest at their wedding when Queen Elizabeth II dropped in to congratulate them.  By coincidence, the Cannings had booked their wedding in part of Manchester's gothic city hall for the same date that The Queen and Prince Philip were later scheduled to make a nearby appearance as part of the Diamond Jubilee events.  The royal couple having heard about the nuptials decided to pop in and wish them well.  Mrs. Canning said she thinks she is going to need a larger photo album.

Many years to the happy couple!

On another gate crashing note, a 32 year old Irishman has apologized to The Queen after getting so tanked that he mistakenly climbed a wall at Windsor Castle believing that he was getting off the grounds.  In fact however he landed uncomfortably close to the royal apartments.  Close enough that he triggered alarms that sent armed police detectives scrambling.

Robert Pennefather was fined £1,100 and sentenced to 14 days in the clink.  The jail time was however suspended for a year.  Rumors, which the Palace has declined to comment on, suggest that the Royal Family may have quietly intervened on Pennefather's behalf to keep him from more serious legal trouble.  The worst punishment for him may well be the absolute ban he is under which bars him from every licensed public house in the UK for one year.  Ouch!
Posted by John (Ad Orientem) at 5:07 PM

It is actions like this that demonstrate that Her Majesty is a truly class act. Many years to the Queen!