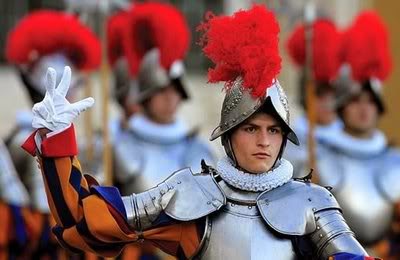 The commander of the Swiss Guard at the Vatican has been removed from his post, apparently as a result of Pope Francis’s unease at the security chief’s militaristic style...

...The pope’s apparent discomfort with the gruelling shifts and strict rules of the Swiss Guard, which were enforced by Anrig, has been evident since his election in 2013. Italian press reports said the pontiff wanted to see a less rigid military corp and one that was less obsessed by rules.

Now that's the ticket. Because everyone knows that the surest foundation stone for a crack military/security service is lax discipline.

It is perhaps worth noting that assassination, like larceny, is primarily a crime of opportunity. Heads of state and other VIPs who insist on moving about in open cars, without bodyguards or who deliberately keep their security at bay are worse than fools. This is because ordinary people can choose to take foolish risks, and in most cases the danger is primarily or exclusively to them alone. But when you are a pope, president or king you are almost never alone in public. The assassin spraying bullets or setting off a bomb is not going to worry about "collateral damage." In the modern world the opposite is more likely to be the case. If you have a martyr complex, that's fine. But you don't have the right to endanger other people by your actions.
Posted by John (Ad Orientem) at 2:27 PM

Glad he's not in charge of the Marines.

Is it possible to impeach a Pope?

Yes popes can lose their office.

That article appears to rely almost exclusively on the Pio-Benedictine Code of Canon Law which has not been in effect since 1983.

The man is a good-hearted moron, and I mean that in a completely non-malicious way. He is a sentimental, gushing, huggy-bear and would make a great parish priest, but is in well over his head as Patriarch of an autocephalous Church.

I knew it was referring to older law and writings but forgot there is a whole new code these days. I believe it's a traditionalist site so I am unsurprised they aren't jumping into the new Code of Canon Law. It will be interesting to see what the new code says on the subject.

Initial digging would suggest that the 1983 Canon Law is silent on the subject of removing the pope from office for heresy. That makes sense seeing as it is an extraordinary situation and requires an extraordinary process. "The Roman see is judged by no one" and all that.

I think AG may have nailed it. There are so many things to admire about this Pope's character (along with a few not so admirable traits). But humility and personal sanctity do not necessarily translate into a great Pope (see Celestine V). After more than a century of really solid Popes, with only the lack luster Paul VI as an exception, I figure Rome was due for a stinker.

It's ironic that Benedict XVI emulates (St.) Celestine V, and is then succeeded by, seemingly, a kind of Celestine V redivivus. (Celestine V was, of course, succeeded by Boniface VIII who, whatever his faults and failures, was not out of his depth as pope.)

According to the Authoritative Commentary on the 1983 Code of Canon Law; "Classical canonists discussed the question of whether a pope, in his private or personal opinions, could go into heresy, apostasy, or schism. If he were to do so in a notoriously and widely publicized manner, he would break communion, and according to an accepted opinion, lose his office ipso facto. (c. 194§1, 2º ). Since no one can judge the pope (c.1404), no one could depose a pope for such crimes, and the authors are divided as to how his loss of office would be declared in such a way that a vacancy could then be filled by a new election." [J.Corridan et al., eds., The Code of Canon Law: A Text and Commentary commissioned by the Canon Law Society of America (New York:Paulist 1985), c. 333

You know, if all of this vituperation were on a thread related to the recent synod the family, I could understand. I think that the coverage of that synod was more breathless than it really deserved, but it at least had the potential to do real damage.

But on a thread about sacking the head of the Swiss Guard?!? Honestly, I am not sure that there is any move that one can take vis-a-vis the Swiss Guard that could merit the term "moron."

If I start shooting a gun randomly into the air I can be convicted of murder if someone dies, even if I had no intention of killing anyone at all. On the other hand, no matter how recklessly I flick my tokens while playing tiddly-winks, I am not going to going to be charged with reckless endagerment, because tiddley-winks are just so inherently harmless.

Mutatis mutandis, it is difficult to understand how any action taken with regard to the Swiss Guard can be either "malicious" or "moronic." The Swiss Guard are the tiddly-winks of military forces.

Besides, it is not even as if the Swiss Guard is responsible for Papal security. That is the function of the Gendarmeria del Vaticano. The gendarmes carry guns. The Swiss Guards carry swords and spears. Which one of these two forces do you imagine is more relevant to preventing terrorist attacks that could kill onlookers to papal events?

Fair enough. Wikipedia also notes that it is the gendarmes, not the Swiss Guard, that is responsible for Papal security, so my broader point still stands.

so my broader point still stands

No it doesn't. The problem is not the particulars of the Pope's security; the problem is his liberal, modernist disdain for a martial institution with fierce loyalty to the Papal office. +Francis is simply uncomfortable around traditionalist society and its institutions, which is a portent of more change to come.

(1) Press coverage of the Catholic Church in English-language secular media is almost always off-the-mark, so it is hard to draw any meaningful conclusions from the linked article in the first place.

(2) If we take the article at face value (which one is ill-advised to do, see #1 above), we know two things. (a) The pope is concerned about the "grueling" shifts the guards are made to work. What exactly does that mean? Who knows (once again, see #1 above)? Nevertheless, a desire to see the rank and file work less grueling hours seems like compassion, not disdain. (b) The dismissed chief, Anrig, has a public link to abuse charges. One can rather understand why a Catholic prelate needs to be careful about the combination of "abuse charges" and "high rank in Vatican." Under the circumstances, it scarcely betokens "disdain" to decide that Anrig was not the best man for the job.