A 95 Year Old Mystery of the Sea Solved 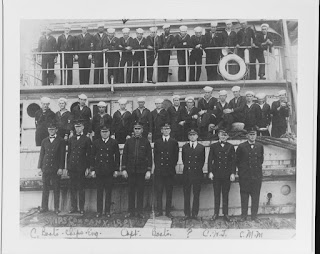 The USS Conestoga left the Navy yard at Mare Island, Calif., on Good Friday, 1921, bound for Pearl Harbor, with a complement of 56 sailors.

It cleared the Golden Gate at 3:25 p.m. and steamed into the Gulf of the Farallones in heavy seas. Conestoga was a rugged oceangoing tug that had once hauled coal barges for a Pennsylvania railroad.

But 17 years after its launch in Baltimore, it had undergone hard use and had a reputation as a “wet boat,” one that shipped water easily.

At 4 p.m. that day, as the San Francisco light ship recorded big waves and gale-force winds, Conestoga passed Point Bonita and was not heard from again.

Wednesday, 95 years later, the National Oceanic and Atmospheric Administration and the Navy announced that the wreck has been found a few miles from Southeast Farallon Island, just off the California coast.

The announcement came at a morning ceremony at the U.S. Navy Memorial in Washington, attended by relatives of the lost sailors.

I used to command a Coast Guard patrol cutter out of San Francisco, and I know that area can be treacherous. We once went out to the Farallons at night, in bad weather, looking for a San Francisco bar pilot who had gone overboard. Never found him, but prayed for him. If I had known about the Conestoga lying on the bottom, I would have prayed for all its crew, too.

"Eternal Father, strong to save,
Whose arm hath bound the restless wave,
Who bidst the mighty ocean deep,
Its own appointed limits keep.
O, hear us when we cry to Thee,
For those in peril on the sea."

A quite beautiful hymn.

That same verse sprang to mind reading this, from my Episcopal past. Thank you, Deacon!