Feeling a draft in the air? 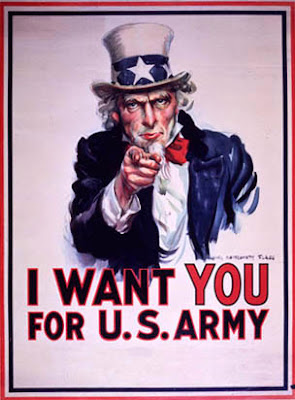 Lt. General Douglas Lute, a senior war advisor to President Bush opened a can of worms a couple days ago by suggesting in an interview with NPR that a return to military conscription should be considered.

If we are to remain in Iraq then I concur.

The United States all volunteer military was not designed for a prolonged war fought on two fronts (Afghanistan and Iraq), while also remaining in a ready to respond condition in other potential hot spots such as the Korean Peninsula. The all volunteer military has been strained far beyond what was envisioned when it was designed. Barring a swift withdrawal from Iraq it is very unlikely that we can continue to meet operational commitments with the current force structure. And at present I see no reasonable hope for the pacification of Iraq in less than five years. It is very likely that the current surge will be shown to be inadequate although a step in the direction we will need to go in if we remain serious about suppressing the islamo-fascists there.

What we as a nation now need to do is to decide whether or not Iraq is a war worth continuing or not. And part of the answer to that question will have to be based on an honest and realistic assessment of the measures likely necessary to continue the war. I believe those measures include (but are not necessarily limited to)...

1. A surge to about 400-500 thousand men probably for a period of 2-3 years with a very slow draw down to take place over a period of 3-5 years thereafter.
2. Sealing the borders between Iraq and Iran and Syria.
3. A universal ban on private ownership and possession of firearms in Iraq.
4. Martial Law in Iraq and the suspension of Habeas Corpus with large scale detentions of suspect groups and individuals.
6. Introduction of military conscription (the draft) to sustain these operations while maintaining a military force that is a credible deterrent to other would be trouble makers in the world.
6. Adding 2-3 divisions to the regular army to permit this surge and relive pressure from the National Guard and Army Reserve who will need time to rebuild.
7. Substantial tax increases to pay for a war which has thus far been largely financed on the national credit card.

It is time to stop burying our head in the sand and as the younger generation is wont to say, do a "reality check" about the costs of "victory" in Iraq. War is not a game. And it can not be fought on the cheap. It is also time to stop expecting that a military force designed to fight the opening stages of the Third World War against the Evil Empire in Europe (but was never expected to continue for a long time without a draft) can continue a war of occupation on the other side of the world for what will ultimately almost certainly be 10 years or longer on an all volunteer basis. The Army is already strained to the breaking point and the National Guard has been so taxed that a significant chunk of it is no longer combat effective.

I strongly suspect that the very idea of a military draft in support of a war of occupation on the other side of the world would be so unpopular that it will effectively compel the United States to end its involvement in Iraq, at least on a major scale. Whether or not that is a good thing, is debatable. There is a growing sense even within the political right that Iraq has gone beyond the point where it is cost effective to continue. And there is a near universal consensus that it was horribly mismanaged and bungled from the word “go.”

Of course what only the neo-con hawks who got us into this mess, seem to be willing to talk about is the question of what will happen if/after we leave. Which only goes to prove the old adage that even a stopped clock is right twice a day. This is of course the great weakness in the liberal / neo-isolationist “get out now” theme. Irrespective of whether or not we should have gone there in the first place, we are there now. And just leaving will have very real consequences for the United States, the region and perhaps most urgently for the people that will be left to the not so tender mercies of the new management in Iraq. Those are consequences which the neo-isolationists do not want to discuss.

All of which makes me ponder the mental faculties of those who are running for president. Whoever gets the job next year is going to have to fix this mess. I do not pretend to have all of the answers. And I am deeply conflicted about what to do in Iraq; i.e. stay or pull out. But I am going to go out on a limb and make one prediction. Based on where we were before we went into Iraq and where we are now, history is not going to be kind in its judgment of the presidency of George W. Bush.
Posted by John (Ad Orientem) at 4:32 PM

Lute is a loon if he really thinks the draft is an option!

Would you be willing to spread the word about www.draftresistance.org? It's a site dedicated to shattering the myths surrounding the selective slavery system and building mass civil disobedience to stop the draft before it starts!

Our banner on a website, printing and posting the anti-draft flyer or just telling friends would help.

PS. When it comes to conscription, an ounce of prevention is worth a pound of cure!

While I am willing to leave your comment up, I can not agree to promote your site. After having visited it, I have to say that I disagree with almost everything on it. But of course it's a free country and you are free to post your opinions.

If the draft were reinstituted, you'd start seeing REAL resistance in America to the war. People would start marching, and the politicians know this. The adventure in Iraq has truly put us between a rock (funny how that sounds like Iraq) and a hard place.