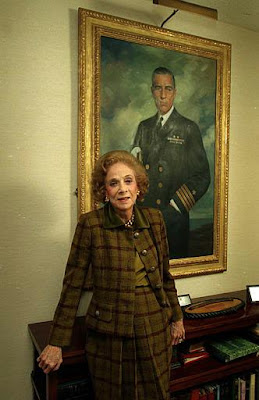 Brooke Astor, the Grande Dame of New York High Society and one of the great philanthropists of the second half of the last century has reposed. When her husband Vincent Astor (heir to the great fur and New York real estate fortune founded by John Jacob Astor) died she became the head of New York Society and spent the next forty plus years raising and giving away vast fortunes in money for the poor. She was also among the greatest patrons of the arts and humanities in the city's history.

With her passing New York has lost an icon and true class act as also one of the last living links to pre-war society and the very different values it embodied. Today one feels there is little sense of duty or noblesse oblige on the part of the wealthy but rather one of entitlement. Her life after Vincent's death was a testament to the productive use of great wealth. In this respect one can only hope that someone will pick up the torch she so nobly carried for half a century. Mrs. Astor was 105. May her memory be eternal.