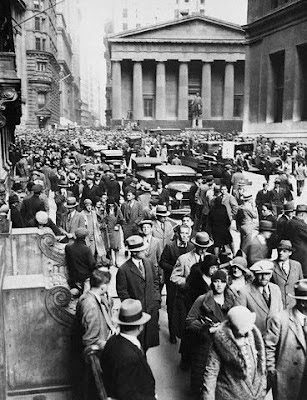 The scene on Wall Street in October 1929

On Thursday the stock market plunged almost 400 points in growing worries over the credit bubble that has been expanding for years. This was after the European Central Bank injected well over $100 Billion and the United States Federal Reserve another $25 Billion or so into the banking system to prevent a severe crisis in credit. The latest plunge (and the extraordinary responses from the governments) came after reports surfaced that a leading French financial institution was holding a significant amount of likely bad debt traceable to the sub prime mortgage industry. Investors on both sides of the Atlantic and in Asia (the sell off was world wide) are worried that the Central Bank and the Fed know more than they are admitting. Which is to say there is likely more bad news coming down the pike. The last time there was this kind of intervention by the ECB was on 09-12-01, the day after the World Trade Center was attacked.

Update: As I prepare to retire for the night reports are coming in that Asian financial markets are seeing steep sell offs in Friday morning trading. The Bank of Japan injected one trillion yen (about $8.1 billion) into the system to stabilize interest rates in short term loans between banks. The Nikkei Index (the Tokyo Stock Exchange) is down by just under 500 points or about 2.7% and the Korean Composite Stock Price Index is off by a little over 3%.
Posted by John (Ad Orientem) at 12:54 AM

Email ThisBlogThis!Share to TwitterShare to FacebookShare to Pinterest
Labels: economics