Orthodox worship and the language of the people 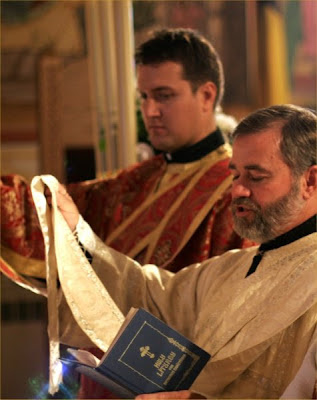 "In peace let us pray to the Lord!"

Given the recent news about the liberalization of the pre-Vatican II Mass (Tridentine) a recent article by Fr.Stanley Harakas may be of interest. He writes in part...

In reference to worship, the early Church in the East adopted a principle of worship in the language of the people -- not a single sacred language inaccessible to the average person. So there was variety of languages, but basically, one Divine Liturgy. In this the Orthodox Church followed the lead of St. Paul, who in discussing the uttering of incomprehensible "tongues" in worship, declared in his first letter to the Christians in Corinth, "If I pray in a tongue, my spirit prays but my mind is unfruitful. What am I to do? I will pray with the spirit and I will pray with the mind also; I will sing with the spirit and I will sing with the mind also. (1 Corinthians 14:14-15).

Like two trains traveling in opposite directions on parallel tracks, the Roman Church is returning to its Latin past, with the hope of recapturing a sense of sacred transcendence in its now popularized worship, while the Orthodox Church is in many ways traveling its historic track of worship toward as fuller practice of worship in the language of the people, while through its rich worship practices, allowing contemporary worshipers to sense the holiness, sacredness and other worldliness of the Kingdom of God.

But there is a rub in all this for the Orthodox. Though we use many different languages in our worship, Greek, Slavonic, Arabic, Romanian and other traditional languages, for many Orthodox these function just like Latin does for the Roman Catholics. It is the language, precisely because it is not understood, because it is exotic, and because of the lack of understanding, that carries for many people the sense of the holy, and not what actually is said and done in worship! Language becomes a barrier to true worship, that is, worship that invites the Orthodox Christian to say with St. Paul "I will pray with the spirit and I will pray with the mind also."

What this seems to point to for the Orthodox is the restoration of the fundamental principle of Orthodox worship, that worship take place in a language understood by the worshippers. However, like the Roman Catholics, but moving in the opposite direction, we have to relearn our tradition, and to do it in a way that accommodates all the faithful Orthodox Christians.

IT'S NOT ABOUT LATIN! The scholarly Fr Stanley seems to sound like the mainstream-media strip-cartoon version of this news. I expected better.

That said, now that they don't have to use it most Roman Catholics don't want to go back to Latin, and because the 1962 services have to be in that language they will become the usage of a robust minority.

Of course using a tongue understanded of the people is a good thing.

But using archaic forms is a natural religious instinct. Protestants do it with the King James Bible, and before them the Orthodox have used (and still use) Slavonic and mediæval Greek, which are to Russian and modern Greek roughly as Middle English — Tyndale or at worst Chaucer — is to this. (The original Book of Common Prayer, Shakespeare and the King James Bible actually are in early modern English. Old English — Beowulf mathelode, bearn Ecgtheowes — is mostly unintelligible.)

That's on top of Father's point that American congregations of foreign origin sometimes retain the old country's liturgical language, which they no longer really understand, for that reason.

The language dynamic is more simple and complicated than Fr. Stanley (is that even a Saint's name?) makes it out to be. Without delving into in-house matters for the Roman Catholics, Orthodoxy has run into a real problem in the last several decades when it comes to putting its liturgical texts into English. First--as Fr. Alexander Schmemann pointed out 40+ years ago--it is not possible to do a "straight" translation of texts from Greek or Church Slavonic into English and expect that the same sense is going to be carried over. Further, it runs the risk of creating a bastardized English that sounds more comedic than pious. Second, the English language already has (arguably) its own religious idiom which ought to be respected as much as possible. And third, the rich hymnography of the Church (especially the Byzantine) presupposes a certain meter that, again, places restrictions on the type of translations used. (There are a few other technical points that I won't bother with here, though maybe some others will chime in.)

As for the Young Fogey's comments, it seems to me depressing that we have entered an era where the language of the King James Bible is deemed too opaque to be usable in the Church's liturgical life. I, at the ripe old age of 27, having nothing but a lower-middle class background, have never found the King James to be either opaque or disconcerting. If I pull back to my parents and grandparents, or the elder relatives of my wife, I find it much the same way despite even less substantial levels of education. If people are exposed to the language, they will learn and understand it. Period. This is how, for example, my wife and sister could be raised on listening to the unadultered text of A Pilgrim's Progress and it's certainly how I was able to hear and read the words of the Reihms Catholic Bible without falling into confusion or despair. So, I wonder, why set the bar so low? Why throw in the towel? I am suspicious that the human race has gotten exponentially "stupider" in the last generation.

Now, it's obviously going to take a great deal of time before there is an "official" set of liturgical texts in the English language. ROCOR is probably the closest to having a broad and consistent set of English texts at their disposal, thanks in large part to the publishing efforts of Holy Trinity Monastery, St. John of Kronstadt Press, and--to a lesser extent--Holy Transfiguration Monastery and its much-revered translation of the Psalter. Other jurisdictions have undertaken their own translation efforts, though to some extent many rely on external texts to fill-in for various parts of the liturgical year. There is still a lot of bickering out there over what is currently available and probably will be since, sadly, politics plays into a good deal of it.

I am curious to learn the Orthodox Church link with the Hellenic culture. So I've suggested some readings on my blogsite. Could you help me with your comments?