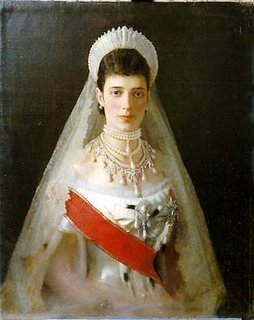 WITH royal ceremony and imperial pomp, Denmark will say farewell tomorrow to one of the most tragic figures in its royal history.

Princess Dagmar, who became Empress of Russia and mother of the last tsar, died in exile in her native land 78 years ago. Now, following her last wishes, her remains are to be reinterred in a vault in St Petersburg beside her husband, Tsar Alexander III, who died in 1894. The ceremony in Roskilde Cathedral, 18 miles west of Copenhagen, will be attended by Queen Margarethe II of Denmark and her family, as well as officials from the Danish and Russian Governments and members of the Romanov family.

The remains of the dowager Empress Maria Feodorovna — as she is known in Russia — will then be taken by a Danish warship to St Petersburg where they will lie in state. A service will be held in St Isaac’s Cathedral on Thursday and she will be interred the next day in the vault of the Peter and Paul Fortress, where all the Romanov tsars are buried and where the bones of the murdered Nicholas II and his family were interred in 1998. It will be the culmination of Russia’s atonement to its last tsar.

The Official Website of the reburial of the Empress Maria Feodorovna has the schedule of events and additional information..
Posted by John (Ad Orientem) at 4:17 AM

Very interesting. I wonder if a Documentary is being made of these events. I am interested in the Lutheran/Orthodox services. Was there ever a dvd made available of the burial of Czar Nicholas & family in 1998? That would be interesting,too.

I am not aware of any DVD of the internment of the Czar Martyr Nicholas II. However it's possible there may be some for sale in Russia. The Lutheran service was separate from the Orthodox one and was mainly for the benefit of the Danish Royal Family. Orthodox do not conduct joint services with other religious confessions. My understanding is that funeral rites in Russia will correspond to a State Funeral with as many of the pre-revolutionary customs for an Empress as can be reasonably performed in modern times. The Funeral Liturgy will be done by the Patriarch of the Russian Orthodox Church.