Hieromartyr Autonomus the Bishop in Italy 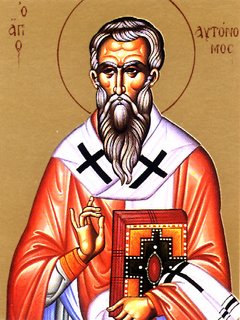 Hieromartyr Autonomus the Bishop in Italy
12 September
The Hieromartyr Autonomus was a bishop in Italy. During the time of the persecution against Christians under the emperor Diocletian (284-305), St Autonomus left his own country and resettled in Bithynia, in the locality of Soreus with a man named Cornelius. St Autonomus did his apostolic duty with zeal and converted to Christ so many pagans, that a large Church was formed, for which he consecrated a temple in the name of the Archangel Michael. For this church, the saint at first ordained Cornelius as deacon, and then presbyter. Preaching about Christ, St Autonomus visited also Lykaonia and Isauria.

The emperor Diocletian gave orders to arrest St Autonomus, but the saint withdrew to Claudiopolis on the Black Sea. In returning to Soreus, he had the priest Cornelius ordained bishop. St Autonomus then went to Asia, and when he had returned from there, he began to preach in the vicinity of Limna, near Soreus.

Once, the newly-converted destroyed a pagan temple. The pagans decided to take revenge on the Christians. Seizing their chance, the pagans rushed upon the church of the Archangel Michael when St Autonomus was serving Divine Liturgy there. After torturing St Autonomus they killed him, reddening the altar of the church with his martyr's blood. The deaconess Maria removed the body of the holy martyr from beneath a pile of stones and buried it.

During the reign of St Constantine the Great, a church was built over the tomb of the saint. In the year 430, a certain priest had the old church pulled down. Not realizing that the martyr's body had been buried beneath the church, he rebuilt the church in a new spot. But after another 60 years the relics of the saint were found incorrupt, and a church was then built in the name of the Hieromartyr Autonomus.