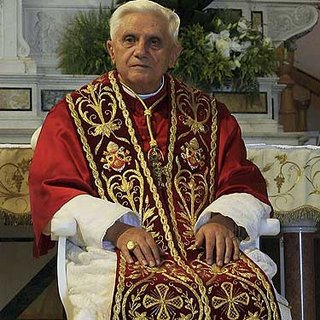 As I noted in an earlier piece, the Pope's comments at Regensburg were likely to provoke a response. That has now begun. The Pope is predictably being condemned in many quarters of the Islamic world with more possibly coming tomorrow when observant Muslims go to Mosque for their prayers. Some have even speculated that this could endanger the pontiff's forthcoming trip to Turkey and his planned meeting with the Ecumenical Patriarch. We should all pray first for this man's safety and secondly that he will continue to have the moral courage to give voice to politically incorrect truths. I would also hope that the hierarchs of the Orthodox Church would step up to his defense.
Posted by John (Ad Orientem) at 6:05 PM

Our Roman Catholic friends definitely have a leader with a good head on his shoulders. Pope Benedict has continually impressed me since becoming Bishop of Rome. I hope that his courage inspires more Christian leaders to speak the truth about Islam and its real relationship to Christianity and other religions.

You make an excellent point, John; where are the voices of support from the Orthodox Church leadership (aka bishops and primates [the ecclesiastical kind])? Of course, those still under the Muslim yoke in various forms have to be careful, no doubt.

I've always been a fan of the monk formerly known as Joseph Ratzinger.