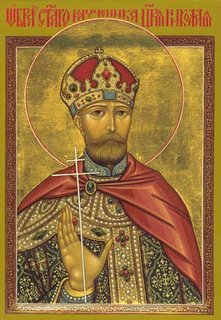 The Holy Royal Martyr and Passion Bearer Czar Emperor Nicholas II
Father Afanasy's testimony about the Emperor's confession is very moving: "Next to me stood one who had no peer among those living on earth. Up to this moment he was our God-sent Anointed one who, according to the Law of Succession, for 23 years reigned as the Russian Orthodox Czar. And now, the humble servant of God Nicholas, as a meek lamb, benevolent towards all his enemies, forgetting all abuses, is fervently praying for the well-being of Russia, deeply believing in its glorious future, kneeling and looking at the cross and the book of the Gospels, is confessing to the Heavenly Father, with me, an unworthy one, as a witness, the innermost secrets of his long-suffering life, reducing himself to dust before the greatness of the King of Heaven, tearfully asking to be forgiven for his voluntary and involuntary transgressions." The suffering of the Sovereign brings to mind the long-suffering Righteous Job, on whose feast day Nicholas II was born. The Emperor's life was comparable to the suffering of Job - he accepted his cross just as the Biblical righteous one accepted the misfortune which was sent to him - firmly, patiently, meekly, and without a shadow of grumbling.

-From the report of the Moscow Patriarchate commission investigating the possibility of canonizing the Russian Orthodox Emperor Nikolai II
Posted by John (Ad Orientem) at 11:48 PM