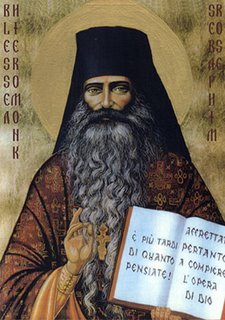 Sept 2nd was the anniversary of the repose of Fr. Seraphim Rose of Platina (1934-1982). This extraordinary man is among the most famous American converts to Orthodoxy. Born Eugene Rose he was baptized as a Methodist and was raised in a normal middle class family. Early in life he abandoned all religious belief professing atheism and later practicing Buddhism. As a young man in college Eugene fell into a life of hedonism. In the 1950s he was introduced to Orthodox Christianity (ironically by his homosexual lover). As his attraction to Holy Orthodoxy grew so his love for the world and its pleasures waned and he gradually abandoned the ways of his dissipated youth. During this period he became close friends with and adopted as a spiritual mentor the great St. John Maximovitch of Shanghai and San Francisco (then archbishop of SF). In 1962 he was received into Orthodoxy via Holy Chrismation by his spiritual father St. John.

In the early 1960’s Eugene with another Orthodox Christian organized a community of Christian booksellers and publishing dedicated to St. Herman of Alaska (not yet canonized by the Church). By 1966 Eugene had reached the point where he and some of the others felt the need to withdraw from the world and pursue the angelic life. They departed the world and settled in the wilderness of Northern California near Platina. There they lived the monastic life under extremely ascetic conditions (no running water or electricity). In 1970 he was tonsured as a monk by the Russian Orthodox Church Outside of Russia (ROCOR) where he took the name Seraphim after St. Seraphim of Sarov.

It was in his monastic life that he also began to write articles and books on Orthodox spirituality and other topics. His works include God's Revelation to the Human Heart, Orthodoxy and the Religion of the Future, and The Soul After Death. He also founded the magazine The Orthodox Word which is still published at the monastery today. His fame soon spread for his spirituality and also for his sound teachings on many subjects though some of his eschatological writings were and remain highly controversial.

He defended the veneration of pre-schism western saints including Blessed Augustine at a time when some challenged the practice. He also strongly defended the grace of the Church in Russia when more radical elements were attempting to deny that the Russian Church retained grace. He became an outspoken critic of the Holy Transfiguration Monastery (Brookline Mass) as it began its slide towards eventual schism.

In 1982 Fr. Seraphim complained of stomach pains and after some procrastination and resistance allowed himself to be taken to the hospital in Redding California. There it was discovered that he was gravely ill. Prayers from all over the Orthodox world went up for his recovery but it was not to be. Within days he reposed.

His body was returned to St. Herman’s Monastery in Platina where it was said that a sweet odor emanated from it and it showed no signs of corruption. After several days he was buried and his grave remains a place of pilgrimage for pious Orthodox Christians. Many miracles have been attributed to his intercession and there is a movement to have him glorified as a saint. At present none of the various Orthodox synods have chosen to act on the matter though it is widely assumed that the ROCOR would be the most logical one to do so if the decision is ever made since he lived his monastic life under their jurisdiction. Informally he is widely referred to as Blessed Seraphim of Platina and some icons have been produced with his image depicting him as a saint (see above).

On a personal note I can relate that I had the pleasure of visiting St. Herman’s Monastery this last Cheesefare weekend in preparation for being received into the Orthodox Christian Faith. The monastery is today under the jurisdiction of the Serbian Church after a brief period where it had become extra-canonical. The monks are extremely welcoming of visitors though they ask that you write ahead or email them. They do have an email address that they check every day or two on a computer in the local town. The monastery remains very rustic with none of the amenities of the modern world. The bunk houses for guests have wood burning stoves for heating in the winter. The food was surprisingly good.

St. Herman’s is located in a remote area of Northern California a little less than an hour from Redding. It is not far from Trinity National Park and the scenery is breathtaking. Pilgrims and those seeking a retreat from the world are always welcome though they do not accommodate women overnight in the monastery. Ladies are encouraged to contact St. Xenia’s monastery for women which is close by. While staying in the monastery visitors abide by the monastic rule there to the extent possible. Spiritual reading material is given to visitors and when they tire of reading they often ask the abbot for some small task to perform with the monks. If you plan to visit, pack conservative attire as modesty is required while on the monastery’s grounds. Also wear comfortable shoes since in the church they follow the traditional Orthodox practice of standing through services. Benches are available for the infirm or those not accustomed to long standing. A flashlight and sanitary napkins are also good things to bring. There is still no running water or electricity. St Herman’s follows the Old Calendar and all services are in English.

For those interested the monks may be contacted by email at: stherman@stherman.com

Hat tip to the Young Fogey whose blog reminded me of the anniversary.

Addendum: When I originally wrote this essay I said that Fr. Seraphim had been raised Catholic. I was mistaken and have corrected the text above. He was baptised in the Methodist Church.
Posted by John (Ad Orientem) at 10:17 PM