The Religion of Peace responds to B16 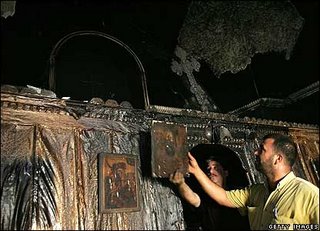 The Greek Orthodox Church of Tulkarm burned by Islamic gunmen.

Since I originally posted my quote of Pope Benedict's remarks at Regensburg while expressing concern that they might provoke a response from people not known for starting a petition drive when they are aggrieved events have sadly gone from bad to ugly. Many churches have been attacked and vandalized; Christians have also been attacked including a nun who was murdered. Ugly threats coupled with ugly demonstrations seem to be the preferred means to prove that Benedict was wrong to make use of a medieval quote calling Islam violent. The irony of this seems to be lost on many though. The editors of the New York Times recently ran a prominent demand for the Pope to recant. No word was printed about the obvious propensity for violence which exists in at least a significant part of the Islamic world towards Christians and Jews. Where are the hierarchs of the Orthodox Church?

CAIRO, Egypt - Al-Qaida in Iraq warned Pope Benedict XVI on Monday that its war against Christianity and the West will go on until Islam takes over the world, and Iran’s supreme leader called for more protests over the pontiff’s remarks on Islam...

“You infidels and despots, we will continue our jihad (holy war) and never stop until God avails us to chop your necks and raise the fluttering banner of monotheism, when God’s rule is established governing all people and nations,” said the statement by the Mujahedeen Shura Council, an umbrella organization of Sunni Arab extremist groups in Iraq...

Another Iraqi extremist group, Ansar al-Sunna, challenged “sleeping Muslims” to prove their manhood by doing something other than “issuing statements or holding demonstrations.

“If the stupid pig is prancing with his blasphemies in his house,” the group said in a Web statement, referring to the pope, “then let him wait for the day coming soon when the armies of the religion of right knock on the walls of Rome.”