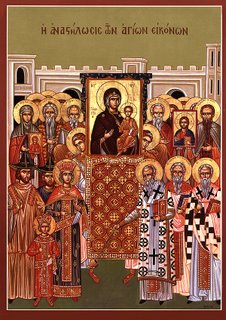 The meaning of the appeal to the Fathers

It has been rightly observed that appeal to "antiquity" was changing its function and character with the course of time. The Apostolic past was still at hand, and within the reach of human memory, in the times of St. Irenaeus or Tertullian. Indeed, St. Irenaeus had heard in his youth the oral instruction of St. Polycarp, the immediate disciple of St. John the Divine. It was only the third generation since Christ! The memory of the Apostolic age was still fresh. The scope of Christian history was brief and limited. The main concern in this early age was with the Apostolic foundations, with the initial delivery of the kerygma. Accordingly, Tradition meant at that time, primarily, the original "delivery" or "deposition." The question of accurate transmission, over a bit more than one century, was comparatively simple, especially in the Churches founded by the Apostles themselves. Full attention was given, of course, to the lists of episcopal succession (cf. St. Irenaeus or Hegesippus), but it was not difficult to compile these lists. The question of "succession," however, appeared to be much more complicated for the subsequent generations, more removed from the Apostolic time. It was but natural, under these new conditions, that emphasis should shift from the question of initial "Apostolicity" to the problem of the preservation of the "deposit." Tradition came to mean "transmission," rather than "delivery." The question of the intermediate links, of "succession" — in the wide and comprehensive sense of the word — became especially urgent. It was the problem of faithful witnesses. It was in this situation that the authority of the Fathers was for the first time formally invoked: they were witnesses of the permanence or identity of the kerygma, as transmitted from generation to generation (Cf. P. Smulders, "Le mot et le concept de tradition chez les Pères," Recherches de Science religieuse, 40 (1952), 41-62, and Yves Congar, La Tradition et les traditions, Etude historique (Paris 1960), p. 57 ff). Apostles and Fathers — these two terms were generally and commonly coupled together in the argument from Tradition, as it was used in the Third and Fourth centuries. It was this double reference, both to the origin and to the unfailing and continuous preservation, that warranted the authenticity of belief. On the other hand, Scripture was formally acknowledged and recognized as the ground and foundation of faith, as the Word of God and the Writ of the Spirit. Yet, there was still the problem of right and adequate interpretation. Scripture and Fathers were usually quoted together, that is, kerygma and exegesis, i grafi ke i pateres (η γραφη και οι πατερες).

The reference, or even a direct appeal, "to the Fathers" was a distinctive and salient note of theological research and discussion in the period of the great General or Ecumenical Councils, beginning with that of Nicea. The term has never been formally defined. It was used, occasionally and sporadically, already by early ecclesiastical writers. Often it simply denoted Christian teachers and leaders of previous generations. It was gradually becoming a title for the bishops, in so far as they were appointed teachers and witnesses of faith. Later the title was applied specifically to bishops in Councils. The common element in all these cases was the teaching office or task. "Fathers" were those who transmitted and propagated the right doctrine, the teaching of the Apostles, who were guides and masters in Christian instruction and catechesis. In this sense it was emphatically applied to great Christian writers. It must be kept in mind that the main, if not also the only, manual of faith and doctrine was, in the Ancient Church, precisely the Holy Writ. And for that reason the renowned interpreters of Scripture were regarded as "Fathers" in an eminent sense [See, first of all, J. Fessler, Institutiones Patrologiae, denuo recensuit, auxit, edidit B. Jungmann, I (Innsbruck, 1890), pp. 15-57; E. Amann, "Pères de 1’église," Dictionnaire de Theologie Catholique, XII, cc. 1192-1215; Basilius Steidle, O.S.B., "Heilige Vaterschaft," Benedictinische Monatsschrift, XIV (1932), 215-226; "Unsere Kirchenväter," ibidem, 387-398 and 454-466]. "Fathers" were teachers, first of all, — doctores, didaskali (διδασκαλοι). And they were teachers in so far as they were witnesses, testes. These two functions must be distinguished, and yet they are most intimately intertwined. "Teaching" was an Apostolic task: "teach all nations." And it was in this commission that their "authority" was rooted: it was, in fact, the authority to bear witness. Two major points must be made in this connection. First, the phrase "the Fathers of the Church" has actually an obvious restrictive accent: they were acting not just as individuals, but rather as viri ecclesiastici (the favourite expression of Origen), on behalf and in the name of the Church. They were spokesmen for the Church, expositors of her faith, keepers of her Tradition, witnesses of truth and faith, — magistri probabiles, in the phrase of St. Vincent. And in that was their "authority" grounded [Cf. Basilius Steidle, Patrologia (Friburgi Brisg., 1937), p. 9: qui saltem aliquo tempore per vinculum fidei et caritatis Ecclesiae adhaeserunt testesque sunt veritatis catholicae]. It leads us back to the concept of "representation." The late G. L. Prestige has rightly observed:

The creeds of the Church grew out of the teaching of the Church: the general effect of heresy was rather to force old creeds to be tightened up than to cause fresh creeds to be constructed. Thus the most famous and most crucial of all creeds, that of Nicea, was only a new edition of an existing Palestinian confession. And a further important fact always ought to be remembered. The real intellectual work, the vital interpretative thought, was not contributed by the Councils that promulgated the creeds, but by the theological teachers who supplied and explained the formulae which the Councils adopted. The teaching of Nicea, which finally commended itself, represented the views of intellectual giants working for a hundred years before and for fifty years after the actual meeting of the Council (G. L. Prestige, Fathers and Heretics (London, 1940), p. 8. Italics are mine).

The Fathers were true inspirers of the Councils, while being present and in absentia, and also often after they have gone to Eternal Rest. For that reason, and in this sense, the Councils used to emphasize that they were "following the Holy Fathers" (επομενοι τοις αγιος πατρασιν), as Chalcedon has said. Secondly, it was precisely the consensus patrum which was authoritative and binding, and not their private opinions or views, although even they should not be hastily dismissed. Again, this consensus was much more than just an empirical agreement of individuals. The true and authentic consensus was that which reflected the mind of the Catholic and Universal Church — to ekklisiastikon fronima (το εκκλησιοστικον φρονημα) [See Eusebius, hist. eccl., V. 28.6, quoting an anonymous treatise, Against the heresy of Artemon, of the third century. The attribution of this treatise to Hippolytus is doubtful]. It was that kind of consensus to which St. Irenaeus was referring when he contended that neither a special "ability," nor a "deficiency" in speech of individual leaders in the Churches could affect the identity of their witness, since the "power of tradition" — virtus traditionis — was always and everywhere the same (adv. haeres. I. 10.2) . The preaching of the Church is always identical: constans et aequaliter perseverans (ibid., III. 24.1). The true consensus is that which manifests and discloses this perennial identity of the Church’s faith — aequaliter perseverans.

The teaching authority of the Ecumenical Councils is grounded in the infallibility of the Church. The ultimate "authority" is vested in the Church which is for ever the Pillar and the Foundation of Truth. It is not primarily a canonical authority, in the formal and specific sense of the term, although canonical strictures or sanctions may be appended to conciliar decisions on matters of faith. It is a charismatic authority, grounded in the assistance of the Spirit: for it seemed good to the Holy Spirit, and to us.
Posted by John (Ad Orientem) at 3:23 AM