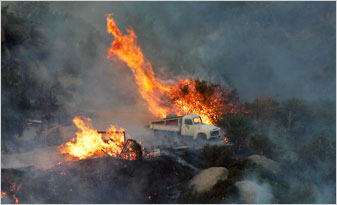 A massive wild fire is still raging largely unchecked in southern California. Thus far it has consumed about 38 sq miles. That’s more than what would normally be destroyed by a large nuclear bomb. Yesterday five firemen were caught away from safety in a freak wind shift while battling to save a home. Three died on the spot and a fourth succumbed later to his injuries. The fifth remains in extremely critical condition with burns over 95% of his body. Prayers are requested for all those affected by this terrible disaster especially the families of the firemen killed and inured in the line of duty. The dead and injured fireman are...

Deceased: May their Memory be Eternal!

Mark Loutzenhiser, engine captain, 44, of Idyllwild. A certified emergency management technician, Loutzenhiser had been a firefighter for 21 years and had also worked as a crewman for the Vista Grand Hot Shots firefighting team and as a volunteer for the Riverside County Fire Department. He had studied fire science at Mt. San Jacinto College. The longtime resident of Idyllwild, Calif., was involved in numerous local programs, including youth sports.

Jess McLean, fire engine operator, 27, of Beaumont. A seven-year veteran, McLean was an outdoors enthusiast who liked to camp and ride his motorcycle to work, according to a neighbor. He studied fire science at Crafton Hills College and had also been a member of the Vista Grande Hot Shots.

Jason McKay, assistant fire engine operator, 27, of Phelan. McKay had been with the U.S. Forest Service for five years and had also worked as a volunteer firefighter in Adelanto. A certified emergency medical technician, he had an associate degree in fire science.

Injured: May God the physician of souls and bodies grant him healing from all injuries and pain.

Pablo Cerda, firefighter, 23, of Fountain Valley. Listed in critical condition Friday. Cerda was in his second year of fighting fires for the Forest Service. He graduated from Los Amigos High School in Santa Ana in 2001 and had attended the Riverside Community College Fire Academy.
Posted by John (Ad Orientem) at 5:47 PM