The NLCS: My predictions... 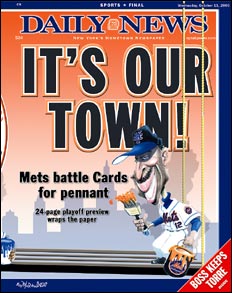 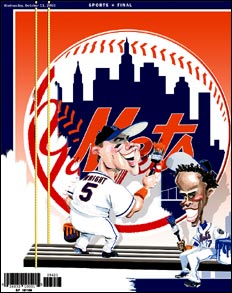 OK. If baseball is not your cup of tea just skip this and move down to the article by Florovsky on the Church & Tradition that I am posting in installments.

For those of you who are still reading, the St. Louis Cardinals are being welcomed to Shea Stadium in the Big Apple tonight. I hope that their visit will be memorable. The National League Championship Series will end with either the Cards or the Mets going to the World Series. The Mets as I am sure you will recall swept the Dodgers in the Division Series playoffs (with only 1 credible starting pitcher!). Now they are looking to make their first trip to the World Series since 2000 when they lost to the other team from NY (their name escapes me). So how is this going to go you ask?

Well a quick look can give us some points of comparison between the two clubs. The Cards have a respectable offense but it pales next to the Mets who have the most lethal line up in the National League. The Card’s first baseman Albert Pujols is their most dangerous hitter. The problem is that he is the bulk of their offense. The Mets have a very deep and dangerous line up and have repeatedly shown that no one outside of the pitcher can be seen as a weak link. If we (I am a Mets fan for those of you just joining us from your home planet) can avoid giving Pujols the opportunity to inflict any serious damage we should be good. In pitching I think there is a slight advantage to the Cards, but not a huge one given what they are facing. I would be more worried about our pitching deficiencies (and they are very real) if the Cards had a better line up. But if the Mets bullpen, the best in the major leagues, can hold up I think we will be ok. The Cards do get an edge in their manager. Tony La Russa is one of the best. Don’t get me wrong. I think Willie Randolph has worked a minor miracle with the Mets. But La Russa has been in the post season as a manager more often than I have been in the drive through at our local McDonalds. If all goes well in the future Willie might be able to make that claim one day. But for now Tony La Russa gets the edge in managers. One fun thing to watch will be the much anticipated clash between Jose Reyes (aka the human bullet) and Yadier Molina who is arguably one of the best defensive catchers in baseball. Molina is not an offensive threat. But he has gunned down almost half(!) of all would be base thieves that tried while he was catching. Reyes on the other hand is used to just assuming that if he reaches first he will also get second, by hook or by crook. And his stats have thus far supported that view. The Mets typically regard a base hit by Reyes as just a slightly delayed double.

One often overlooked area of importance is team spirit. Here the advantage is solidly Mets. These guys have been playing, and winning all year while plagued with injuries and other problems. It’s a team made up with an impressive combination of young guys and veterans many of whom have never been in the post season much less the World Series. But there are veterans who have been there and done that. What is driving the Mets is a combination of cohesion and esprit de corps. A few years back (in the dark ages) when the Mets were not doing so hot, someone asked Chipper Jones of the Atlanta Braves why they were doing so well against the Mets who had on paper an impressive collection of players. Jones replied “We have a team.” That’s what exists now for the Mets. These guys are not just talented. They also like each other and support each other when one is down for one reason or another. If a player has been hurt or slumping all year there has been someone (or often multiple someones) who stepped up and filled the void or propped up the team / player. This is a team that works well together and has one driving goal. They want a ring.