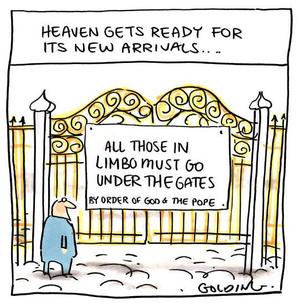 A number of good articles have come to my attention on the subject of what happens when young children die. This is an agonizing event for those left behind and it can be made much more so by uncertainty regarding the fate of the child’s soul. In recent weeks there has been a great deal of discussion over the prospect that the Roman Catholic Church may be preparing to condemn a pious myth that has been so long and widely held that it has gained something close to the status of doctrine in the minds of some in the Roman Church. That myth is that the souls of un-baptized children are denied the beatific vision of paradise by virtue of their ancestral sin. This is largely a product of the teachings of Blessed Augustine which have never gained much currency in Orthodoxy. According to this belief the souls of those children not baptized but too young to have been capable of committing any conscious sin were barred by the stain of original sin from heaven and instead went to place commonly called Limbo (Limbus Infantium).

It is not my intention to join this discussion since it has already been addressed by various Catholic writers at great length and I have nothing to add to it. Al Kimel over at Pontifications has posted three (essay 1, essay 2, essay 3) articles on this issue in which he has made it clear he is shedding few tears at the passing of this belief. The subject is also being discussed by Michael Liccione over at Sacramentum Vitae which is hosting the discussion from Pontifications. For a defense of Limbo one may read this article over at Seattle Catholic (a very conservative web site) and this essay by Prof. Robert Miller at First Things.

The two other articles which I would commend to the interested reader are from an Orthodox perspective. The first is by Fr. John Breck which can be found on the website of the OCA. It is a short essay approaching the issue from an Orthodox theological perspective. The second is an article by Fr. Stephen Freeman just posted on his new blog. I have no recollection of ever reading anything by Fr. Stephen which I did not like, and this is no exception. It is I think sufficient for me to say that I am not a fan of Limbo (which is very un-Orthodox). On a more personal note, I can still remember driving through the Catholic cemetery where my grand parents are buried and seeing the area set aside for the graves of un-baptized infants. It was a most tragic place and I always felt great pain for the families whose children were denied even burial in consecrated ground.
Posted by John (Ad Orientem) at 10:16 PM

Thank you for the kind words. By God's grace I hope to write postings that are of use to us all and (with fear and trembling) Orthodox. Fr. John Breck's piece really does an excellent job in a few words. God's peace.