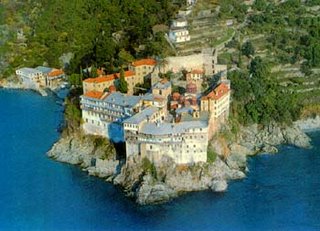 Welcome to the Monastic Republic of Holy Mount Athos. Please set your calendar back a thousand years.

Clocks here run on Byzantine time, which starts at sunset. Dates are calculated according to the Julian calendar of the Roman Empire, which varies by 13 days from the modern Gregorian calendar you're used to. Some settlements are supplied solely by mule teams, and the flags of Byzantium still fly.

Radio? Television? Newspapers? Paved roads? If they didn't exist in the year 972, you probably won't find them here.

And if you're a woman, you'd better make other plans. Females have been strictly forbidden here for a thousand years. Not even female animals are permitted.

Mount Athos is an Eastern Orthodox monastic republic and a surviving administrative unit of the Byzantine Empire -- a fully functioning mini-state with roads, settlements and a capital city, all operating under a charter granted by the Byzantine Emperor at Constantinople in 972.

Actually, I believe that, for some strange reason, an exception is made for female felines. Must be in the Rudder somewhere.