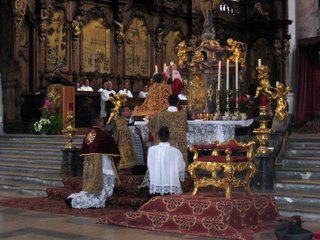 It has been a while since I posted anything on the subject of the classical rite of the Roman Liturgy. There were numerous rumors floating around earlier this year that Pope +Benedict XVI had signed or was preparing to sign a universal indult (permission) for the use of the 1500 year old liturgy by any priest of the Roman Rite. And there was some serious disappointment in many circles (and some relief in others) when this did not materialize as rumors had suggested during the Latin Holy Week. I said then that I felt strongly that some sort of permission was very likely to come and the timing was not as important as what was produced.

In the last couple of months the rumor mill has once again been shifting into high gear. Sometime in November has been speculated as the new date for the indult to be issued. In the last few weeks many Traditionalist blogs and web sites such as Rorate Caeli have been giving guardedly optimistic reports that something was stirring. I have deliberately refrained from posting on this subject in order to wait for some form of confirmation from more reliable sources. However today it appears that this “rumor” is no longer a rumor. It’s also not quite a formal announcement, but the mainstream press has reported that something is coming. The Times of London and CWN have both reported that some form of liberalization is imminent with respects to the pre-Vatican II Missale Romanum.

Obviously this is good news for the Roman Church, and the answer to many prayers. But what does it mean for Orthodoxy? I think this is a positive move which will help to create an atmosphere more conducive to the restoration of theological orthodoxy (small “o”) in the western church. As most know there has been much concern in Orthodoxy about the chaos in the pews and even within the clergy that has been widespread since Vatican II. Lex orandi, lex credendi, is the traditional rule. If people start praying and worshiping according to a more orthodox form it can not but help the unfortunate situation in the Roman Catholic Church. For now however we should simply wait and see. As I have said many times, until it’s issued by the Vatican with the Pope’s signature, all of these reports and rumors + .50 cents will get you a (small) cup of coffee.
Posted by John (Ad Orientem) at 5:47 PM

I hope the indult is granted not only because it is a move toward orthodoxy but also for a slightly more selfish reason: I want to attend a Tridentine Mass! I've only been able to attend one ever and it was at a small Old Catholic Church with a rather Protestant-looking building and a total of less than 10 people in attendance. It was beautiful there, and I would love to attend one in a large cathedral with many people!