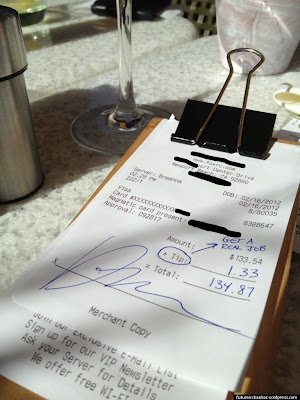 A banker left a 1% tip in defiance of 'the 99%' at a Newport Beach restaurant the other week, according to his dining companion and underling who snapped a photo of the receipt and posted it to his blog, Future Ex Banker. (Update: the blog is now offline.)

In posting the photo, the employee gave some background on his boss and the receipt:

Mention the “99%” in my boss’ presence and feel his wrath. So proudly does he wear his 1% badge of honor that he tips exactly 1% every time he feels the server doesn’t sufficiently bow down to his Holiness. Oh, and he always makes sure to include a “tip” of his own.

The "tip" of his own in this case was to tell the server to "get a real job."

What a no-class bum!

Update: This was a hoax.  The image was doctored and the whole thing was a lie.  One can reasonably suspect that it was done by someone with a left wing political agenda.  In any case I am leaving this up as a cautionary reminder of the willingness of people to lie and fabricate to advance an agenda.
Posted by John (Ad Orientem) at 9:55 PM

That disgusts me. I used to work as a server and can tell you that those people work their butts off. They have a "real job" much more so than some jerk sitting at a computer playing with "imaginary money."

I pray that this man has much time to repent.

The time it takes for the blade of the guillotine to drop from raised position to neck ought to be quite enough.

Last time I checked, being a waiter or waitress was a real job, a job that pays well below the minimum wage because they work for tips.

More stuff like this, and we really will have some Hope and Change in this country.

Wow. Having worked in the service industry, this sort of thing almost makes me want to turn Red.

If this is true, then I can think of a lot stronger words for him than "bum"

I worked briefly as a waitress so I know first hand what it is like. I remember vividly waiting on a table of 15 people by myself. Everything went off without a hitch for such a large table. I was kept hopping the whole time they were at the table and then they left me with no tip. I was just stunned. My boss told me that she had been watching me and that I had not deserved that. So she gave me the tip out of the drawer.

I think everyone should wait tables at least once in their life and they would never dream of saying that it isnt a real job nor would they treat waitstaff badly.

Whether it was politically motivated or not, this sort of crap happens every day to servers (the proper term). We get screwed by people who perceive because the collective of society (**cough** the Ohio and other States legislative powers that be) decides that we don't need to make minimum wage because we get tips, that we shouldn't get tipped for good work either.

Well I did work at a very busy and popular restaurant and some (sometimes many) nights I would get undertipped, not because of my abilities as a server, but because people thought that it was optional to tip or they were simply completely ignorant of tipping etiquette. And, yes, it was typically either the very poor who should not have been coming to the establishment or the very rich who were simply miserly. And I say that as a male with a classical liberal (i.e. Conservative Republican) ideologies.

Not that the answer is necessarily legislation, but it ought to be known that even 10% is not a good tip in many locales (I know it differs from State to State though, so use your best judgement). When in doubt, use 10% and double it to get 20% unless you get really terrible service, then leave 10%. I can assure you your point will come across much more clear than if you left nothing or next to nothing. Then you'll just be taken as a good for nothing jerk.

For what it's worth my rule on tipping is I start at 15% and it can go up or down by 5% depending on the level of service. It's generally not hard to get 20% from me and the service has to be really quite poor to get only 10%.

If the service was so rotten, or your server was overtly rude, that you can't in conscience leave even 10% then don't leave anything. But understand that this is a very powerful statement and unless the waiter knows you are extremely dissatisfied with the service he/she is likely to feel insulted.

In the last twenty years or so I think there have been three times where I could not leave a tip. In each case I asked to speak with the manager and explained exactly why I was not tipping.