Feast of St. Valentine the Presbyter & Great Martyr of Rome 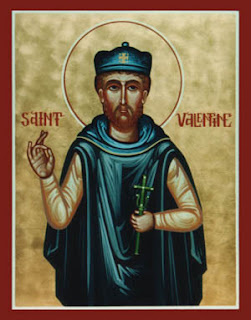 Today is St. Valentine's Day on the Western Church calendar (we commemorate him on July 6th).  Below is an address by Bishop Demetri on the story of St. Valentine the "patron of love."


Each year, the NAC Midwinter Meeting is scheduled to fall on the weekend nearest the 14th of February, and as we all know, Sunday is "Valentine’s Day", as it is called in our secular culture, or as the church would call it "the Feast of St. Valentine."

I would like to spend a few minutes to familiarize ourselves with the life Saint Valentine?

Who was Saint Valentine?

St. Valentine was a priest near Rome in about the year 270 A.D, a time when the church was enduring great persecution. His ministry was to help the Christians to escape this persecution, and to provide them the sacraments, such as marriage, which was outlawed by the Roman Empire at that time. For his belief and practice, St. Valentine was arrested, and imprisoned for his refusal to deny Our Lord and embrace the Roman gods.

While in prison, St. Valentine continued to minister, even witnessing to those who guarded him. One of the guards was a good man who had adopted a blind girl. He asked St. Valentine if his God could help his daughter. Valentine prayed and the girl was miraculously given her sight, demonstrating the power of the One True God. The guard and his whole family, 46 people in all, believed in Christ and were baptized. The emperor was furious about this, so he had St. Valentine beheaded.

St. Valentine’s knew that he could be arrested for his belief and Christian ministry. He knew that refusal to recognize the Roman gods would result in imprisonment. And he knew that if he continued to witness to Christ in the prison he would make his captors angry, and would probably result in his death. But he continued, because he loved the Lord and his fellow humans. He was willing to risk his life in being an instrument in the healing of the blind girl’s infirmity, and in doing so spread the Good News of Jesus Christ to those who needed to hear it.

This is briefly who St. Valentine was.

"Be My Valentine." This is a phrase that conjures up a lot of different images associated with the celebration of Valentine's Day. Cards with hearts and little poems on them. Candy and flowers given to someone one we love. Young and old alike expressing their affection for their sweethearts. February 14th, for our culture, means cards, candy and flowers.

Somehow, this feast of the church has been skewed to include snapshots from pagan mythology, such as cupid, with the focus of the day only on romantic love. For most, it is a shock to hear that this is a day to remember and celebrate the life and martyrdom of a Christian Saint.

"Somehow, this feast of the church has been skewed to include snapshots from pagan mythology, such as cupid, with the focus of the day only on romantic love."

when you consider that Christians have adapted the pagan Winter Solecist festival for Christmas, as well as other pagan celebrations such as Easter, it's not all that shocking. If nothing else, the christians are more guilty of skewing other religious celebrations than any other culture.

Thanks for that reply Anon - hilarious! It's a spot on caricature of every anti-Christian post I've ever read - even including the misspellings!

Happy Valentine's Day to you!

That was awesome. That kind of mistake will make you believe in God.

Truly funny! Are you sure that wasn't on purpose? Considering that a solecist is one who makes a solecism, which that most definitely was...