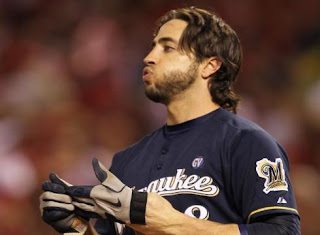 SURPRISE, Ariz. – Milwaukee Brewers left fielder Ryan Braun, the NL’s reigning most valuable player, won his appeal on Thursday of a 50-game suspension triggered by a positive drug test in October, a monumental decision that affects everything from the balance of power in the National League to the perceived legitimacy of baseball’s individual awards and the integrity of its drug-testing program.

“It is the first step in restoring my good name and reputation,” Braun said in a statement. “We were able to get through this because I am innocent and the truth is on our side.”

Braun, 28, is believed to be the first major league player to successfully win such an appeal — although other examples would not necessarily have come to light, since the process is designed to keep the player’s name secret unless the suspension is upheld. ESPN, citing two anonymous sources, first reported in December that Braun had tested positive for synthetic testosterone during the playoffs and would be suspended unless he wins an appeal.

I like Ryan Braun and was very saddened when he was fingered for cheating last year.  As for this ruling, I am going to give him the benefit of the doubt since he won his appeal.  But the whole thing is leaving a bad taste in my mouth.  It sounds like he got off on a technicality.
Posted by John (Ad Orientem) at 11:39 PM

Yes, he got off on a technicality, but as I am sure his lawyers told him, that's all you need. An arbitration hearing -- particularly one which is supposed to be confidential -- is not the proper forum in which to clear one's name. The name of that game is to win, and kudos to his legal team for latching on to an embarrassing and absurd mistake on the part of the MLB-appointed sample collector and leveraging a victory out of it. Not only does it clear Braun of any chance that he might have to serve an unfair suspension (more on that in a moment), but it sends a powerful message to MLB that this kind of sloppiness has costs for the integrity of the MLB drug testing procedure and its officials. The same logic applies with regard to the federal rules on sealing wire tap tapes/discs and transferring them to a secure location: it not only prevents tampering, but it shuts down any plausible suspicion that tampering has occurred. Moreover, when officials fail to properly seal the tapes, they risk losing the evidence altogether, which provides a powerful incentive for them to follow the established protocols.

There is a discrepancy in the reporting on Braun's test. Some sources claim it was definitely a PED; others are saying that the elevated testosterone came from a "banned substance." Perhaps this is just due to sloppy reporting, but the distinction is important. Additionally, Braun has always been a good player and he's young. While he obviously had an MVP year last season, it's not as if his preceding time in baseball was mediocre. Moreover, I expect his 2012 season will be comparable to 2011 -- he's only 28, after all. (Then again, without Fielder in the lineup, it's possible some of his offensive numbers could take a slight dive.) It's not as if we saw Braun muscle-up last season like Barry Bonds, nor is he struggling at this point to extend his career like Manny Ramirez or Roger Clemens.

My suspicion all along is that he carelessly took something which probably elevated his testosterone levels. However, given the problems with the chain of custody over the sample and the chance that an ill-stored sample could result in breakdowns which tainted the sample (which even the Olympic testers admitted is a possibility) and revealed elevated levels which would otherwise not have been detected, his sample was pegged for a second round of testing which revealed the alleged "banned substance" (or, maybe, PED). Perhaps, had the sample gone through the normal process, no testosterone elevation would have been detected and no second test on the source of the elevation would have occurred. But all that really says is that the testing procedures are allowing through some supplements which don't normally result in a closer look. People can knock Braun for trying to play on the margins, but the rules are the rules. If it came out that huffing paint thinner would give a guy an edge, there'd be 300 MLB player addicts in a week.