More on the Dinner Menu 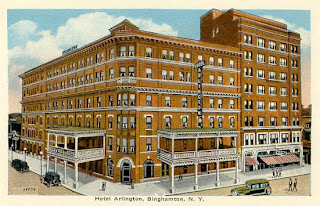 The Arlington Hotel circa 1930's
A couple days ago I posted a dinner menu dated October 13 of 1896 from an establishment called The Arlington in my hometown of Binghamton New York.  Subsequently I received several inquiries for more details and after a little online research I have discovered that The Arlington was an upscale hotel once located near the old train station.  The hotel was apparently a popular place to see and be seen and catered to local society as well as travelers of the more affluent type.  It was built sometime in the 1870's or 80's (still trying to pin down the date) and was upgraded a number of times over the years.  Sometime in the early 1910"s the hotel had some of its rooms converted into high end suites de luxe with the unheard of convenience of en-suite water closet and bath.  Everyone else still had to hoof it down the hall when nature called.  The restaurant with open terrace seating during warm weather, had a high reputation (as the menu might suggest) and was often booked for important dinners and functions.  Sadly the building that housed the hotel was torn down in 1969 as part of a so called urban renewal project to make way for a new post office among other things.  Another larger image of the hotel dating to the 1920's can be seen here.
Posted by John (Ad Orientem) at 1:22 PM