Why World War I Resonates 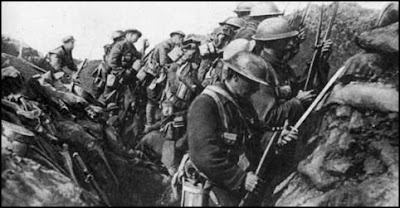 Soldiers fix bayonets before going "over the top."


IN France I live near a little village called Sadillac. It’s no more than a cluster of houses, an old chateau, a church and a graveyard surrounded by a few farms and vineyards. The village probably hasn’t changed much since the French Revolution; its population hovers around 100. By the graveyard is a simple obelisk with the names of the 30 or so young men from Sadillac who died in the First World War, 1914-18. It’s almost impossible to imagine the effect on this tiny community of these fatalities over four years. Every year on Nov. 11 at 11 a.m. — the hour and the day of the 1918 armistice — villagers gather to participate in a short memorial service around the obelisk.

In 2014 it will be a hundred years since the First World War began, and yet its presence in novels, films and television has never been greater — in “Downton Abbey,” on television, in Steven Spielberg’s movie “War Horse,” in a mini-series of Sebastian Faulks’s “Birdsong” and, coming soon, in Tom Stoppard’s adaptation of Ford Madox Ford’s “Parade’s End.”

The last old soldier or sailor has died and almost all of the witnesses have gone, but the war exerts a tenacious hold on the imagination.

Email ThisBlogThis!Share to TwitterShare to FacebookShare to Pinterest
Labels: history, World War I

World War I created the twentieth century as we lived it. It created Lenin and Stalin and Hitler and that whole rogue's gallery of monsters. Gavrilo Prinkip was in my opinion the single most influential man of the last century. May he rot in hell.