Special bond of a rescue dog and dying boy 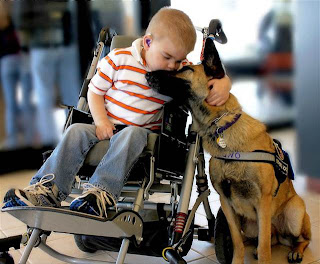 
As nearly anyone who has adopted a dog or cat from a shelter can attest, there’s something special about a rescued pet; it’s as if the animal senses he’s been given a second chance at life. That’s certainly the case with Juno, a Belgian Malinois who was rescued from a shelter just days before she was to be euthanized. But since coming to live with her family in Alcoa, Tenn., Juno has taken on the role of rescuer to four-year-old Lucas Hembree.

Lucas suffers from Sanfilippo syndrome, an inherited, metabolic disease caused by the absence or malfunctioning of an enzyme needed to break down long sugar molecules. As the disease progresses, children lose the ability to speak, walk and eat. The disease also causes severe neurological damage that leads to aggressive behavior, hyperactivity and seizures.

“The most catastrophic thing parents hear when they learn their child has this disease is that there’s no cure or treatment available,” says Lucas’ father, Chester.

There is a cure. The power of God in Jesus Christ.